So this is Christmas? 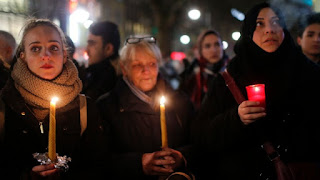 Our President-elect sure has a way of compounding tragedy with mean-spirited comments, leaving it up to his minions to explain his positions afterward.  I was watching a Trump spokeswoman on CNN trying her best to downplay his harsh rhetoric these past two days for attacks that took place in Europe.   Once again, he evoked his Muslim ban and called the incident in Berlin an attack on Christianity, before backpedaling and calling it an attack on humanity.

Trump convened a special meeting with his national security adviser, General Flynn, to address the violence in Berlin and Ankara.  As usual, he took the events out of context, projecting them on American soil like he did similar European attacks during his presidential campaign.  In his mind, this affirms his view that Muslims need to be screened.  Somehow, he is able to make just about everything about himself!

It would have been more appropriate for him to send his condolences to Germany and Russia, as President Obama did, and offer them our support through this difficult time.  The contrast is startling and tells us a lot about the nature of these two men.  It also brings a heavy sense of foreboding to the New Year given that Trump will assume office in late January.

Trump is not alone in his condemnation.  His Dutch counterpart similarly voiced his indignation over the attacks, foisting the blame on Angela Merkl for opening the borders to a "tsuanami" of Islamic terror in Europe, gruesomely reported by Fox News and other conservative blogs.

We should know by now to expect such attacks during the holidays because this is when the most attention will be paid to them.  Rather than recognize these extremists as anarchists, we continue to identify them with Islam, when their actions have absolutely nothing to do with the religion.

Islam, like Christianity, is similarly going through a spiritual season, Mawlid al-Nabi, albeit completed recently.  They too know the sanctity of this month and most everyone chooses to honor it in a peaceful way.

Yet, Il Comandante is ready to wage holy war over what he perceives as an attack against our Christian faith since one of the incidents took place at a Christmas bazaar in Berlin.  The Siege of Aleppo has been going on unremittingly for five years with virtually no respect given to Muslim holy days.  As awful as the tragedy was in Berlin, it doesn't begin to compare with the loss of lives and property in Aleppo, yet we pay little respect to the ongoing bloodshed in this city.  In fact, our President-elect cheered the Syrian and Russian military forces in October.  One can only hope that Army Lt. General Flynn will fill Trump in on Russia's dubious record of fighting terror, since our President-Elect doesn't seem to show much interest in intelligence briefings.

Most of all, it needs to be remembered we aren't the only religion celebrating events this holiday season.  Virtually all religions have a commemoration in December and early January, given that it is the time of year that our days start getting longer in the northern hemisphere.   We need to be showing unity, not sewing seeds of division, particularly in the face of terrorist acts.   Maybe Trump should learn from the message given by Berlin's Muslim community.