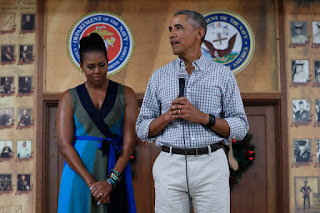 President Obama sparked a fair bit of controversy by implying he could have won a third term if he ran with the same message he did in 2008 and 2012.  Of course, that was quickly disputed by Donald Trump and his Trumpkins.   Who is to say?  It was such a wacky election cycle that anything was possible.

A lot of blame has been foisted on Hillary for failing to deliver.  Joe Biden even suggested her heart was not in it, which was a pretty strange thing to say given the amount of energy she poured into her campaign.  Obama was more circumspect, saying that the media played a big role in undermining Hillary's campaign.

While the media did in fact play a major role in this debacle, we can't look past the Democratic Party, which failed the last 8 years to build on its 2006 and 2008 victories.  It essentially allowed the Republicans to set the narrative by attacking Obama at every turn.  It reached a point in 2012 and 2014 where Democrats ran away from Obama in state elections only to find themselves suffer even more for it.  Their failure to not only stand behind their leader but offer a clear message proved to be their ultimate undoing.

There was never any strong defense of the Affordable Care Act or an attempt to come to terms with the huge debt we had accrued largely thanks to the Bush tax cuts and a bloated military budget that Republicans refused to consider when it came to cuts.  Instead, the Dems let the Republicans pin domestic programs like "Obamacare," expanded Medicaid, food stamps and other "handouts" as the reason we found ourselves so deep in the hole.  All too often, the Dems walked away from these issues rather than confront them, implying weakness.

Even something as simple as global warming, which 97% of scientists can agree on, the Dems were unable to convince the electorate of the importance of cutting back on fossil fuels.  In fact, we saw Blue Dog Democrats like Joe Manchin and Mary Landrieu promoting the Keystone Pipeline, despite plummeting oil and coal prices as a result of the growth of renewable energy sources.  The Dems essentially conceded the "jobs" argument to the Republicans even though renewable energy suppliers have created far more jobs than has the coal industry in the last 8 years.

Time and again, the Dems ran away from the issues that defined them.  They treated renewable energy, Obamacare, gay marriage and other "liberal" issues as scarlet letters because they didn't play well in their states.  2014 represented the nadir, seeing just about every Democratic candidate run away from Obama in the midterm elections, only to suffer their worst electoral defeat during his administration.

Of course, many of them blamed Obama afterward, saying that he put them in untenable situations with his support of issues that ran counter to their states' interests.  Yet, Kentucky, where Allison Lundergan Grimes ran against Mitch McConnell for his Senate seat, had one of the most effective health care exchanges in America thanks to a proactive Democratic governor, much to the chagrin of their leading senator.  Texas has made a massive investment in wind energy, so much so that it now has an oversupply, cutting into oil and coal.  Many other "conservative" states have made similar investments.  Las Vegas is now run totally on renewable energy, at least during peak hours.  Yet, you hardly hear this mentioned on the campaign trail.   Why don't Democrats trumpet these successes?

Instead, we now find Kynect being dismantled by a Republican governor due to the fact only 19% Of state voters turned out for the 2014 elections.

I think this is what has beguiled Obama throughout his tenure.  Here is a man who has done everything in his power to promote affordable health care, renewable energy and broader civil rights, but until this election cycle was treated as anathema by his own party.  Only now have Democrats tried to rally around him thanks to his high approval rating, but it turned out to be too little too late.

The damage was already done.  Many Americans viewed Obama as a failure, especially in crucial states that turned the electoral college for Donald Trump.  Democrats played into the Republican narrative rather than challenge it, and the results have been disastrous.  Many have tried to explain why, but the basic reason is that Democrats have shown little backbone, acting as though "sanity" would win out over the radicalization of the Republican Party. Now Dems face their most monumental defeat, losing the White House to a man totally unqualified and unprepared to lead the nation, riding to power on a wave of manufactured popular unrest.

This was the result of the Democrats being unable to convey any clear, much less united message in response to the constant refrain of doom and gloom presented by the Republicans.  Dems thought it was enough to look at the positive growth rate tables and job reports, but few bother to do this.  You have to constantly remind people of the state of the economy, and Dems did not do so.  They allowed Trump and other conservative candidates to bandy about figures that made no sense like a 42% unemployment rate.  Granted, the media aided and abetted this false narrative by giving Republicans a platform to spout such absurd numbers, but many persons now rely on social media for the bulk of their "news" and this is where these fake stories spread like wildfire with the Dems doing little to combat them.

Well, the Democrats, and for that matter the Republicans, won't have Obama to kick around anymore.  Democrats now have to deal with a post-Obama political world and find young leaders who can re-energize the party, otherwise it is going to be a very long four years.