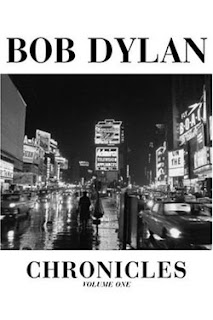 Here is a book review of Chronicles, Volume 1, which James Kunstler wrote.  You can pick up inexpensive copies at abebooks, if interested in reading Dylan in his own words.  In the later chapters, Wilentz pours over Chronicles in deciphering some of his songs.  It really was fascinating to learn Dylan had such a big range of literary interests, and a passion for the Civil War, that was infused into many of his songs.  Dylan was apparently an avid reader those early days in the Village, checking out numerous books at the New York Public Library as he searched for something deeper in his lyrics.
Posted by James Ferguson at 4:35 PM