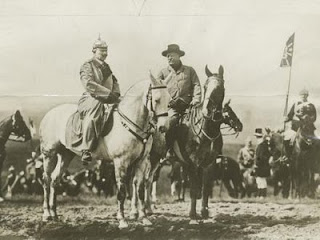 I started reading an advance copy of Colonel Roosevelt and am enjoying Edmund Morris' descriptions of Roosevelt's time in Europe, where he was feted by virtually every head of state, including Kaiser Wilhelm, who invited him to see German maneuvers, which apparently left Roosevelt deeply troubled about the state of military affairs in Europe, as Germany was all too obviously the best organized force on the continent.  Seems the Kaiser wanted Roosevelt to take this impression home with him, especially after the run-ins they had over Venezuela while he was President.