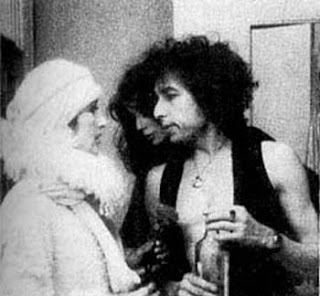 I have to say this movie eluded me completely. Will have to track down a copy.

THERE'S an insolence about "Renaldo and Clara," the four-hour film written and directed by Bob Dylan and featuring members of his Rolling Thunder Revue, that is not easily ignored. Mr. Dylan, who has a way of insinuating that any viewer who doesn't grasp the full richness of his work must be intellectually deficient or guilty of some failure of nerve, has seen fit to produce a film that no one is likely to find altogether comprehensible. Yet for anyone even marginally interested in Mr. Dylan—and for anyone willing to accept the idea that his evasiveness, however exasperating, is a crucial aspect of his finest work — "Renaldo and Clara" holds the attention at least as effectively as it tries the patience.

From a 1978 review by Janet Maslin, NYTimes

Here's a clip of the oft-mentioned Tangled Up in Blue from the movie.
Posted by James Ferguson at 4:17 PM