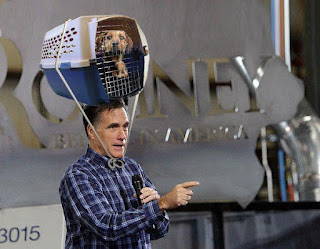 It isn't August, but the "dog days" have really heated up with the Romney camp digging into Obama's Dreams of My Father for some "red meat" to throw to the crowd.  This after the Obama camp focused on Romney's infamous 1983 vacation in which Mitt strapped Seamus (albeit in a dog carrier) to the top of the family wagon.  It is kind of hard to compare a 30-something-year-old man strapping a family dog to the roof and a five-year-old boy being given a fuzzy story about "you are what you eat" by his step-father as he feeds him dog meat, but leave it to the Romney camp to inflate this into tabloid news.  I have to wonder how the SPCA weighs in on the matter?
Posted by James Ferguson at 12:43 PM