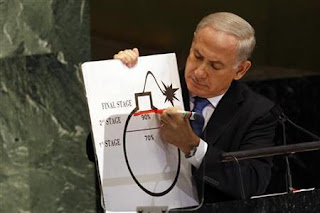 One can only imagine that this little presentation was for American consumption, as Bibi Netanyahu illustrates his red line.  As a result of all this bellicose talk this past week in regard to Iran, oil prices have shot up, thanks to the jittery commodities market.  Obama offered a tough but well measured speech, which of course was assailed by the Republicans, notably Allen West, who felt that Obama should have invoked the "Angel of Death" on Islamicists.  And, Romney and Ryan wasted no time decrying Obama's defense cuts, noting the jobs that would be lost in Virginia.   Ryan had supported this bi-partisan measure back in 2011 as a means of reducing the deficit, and actually included defense cuts in his Republican lauded deficit reduction plan.
Posted by James Ferguson at 10:50 AM