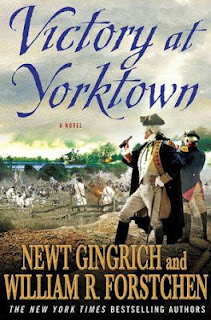 I was listening to Moonbase Newt on The Colbert Report the other night and he mentioned his new novel on Washington, Victory at Yorktown, completing a trilogy I never knew existed.  Stephen Colbert was having fun with Newt about the election, space stations and his passion for history novels.  I'm not sure whether Newt projects himself as George Washington, as Glenn Beck did in his universally panned biography of the founding father, or if he is attempting to educate young impressionable minds by appealing to their sense of adventure.  I did a quick search and noticed that William Forstchen  is also credited in these novels.  Seems Bill is a pro in this sort of genre, having had his sci-fi series, The Lost Regiment, optioned by Tom Cruise and M. Night Shyamalan for a movie.  I'm surprised Newt just didn't put Washington on the moon, but then I guess he wasn't quite willing to go that far.