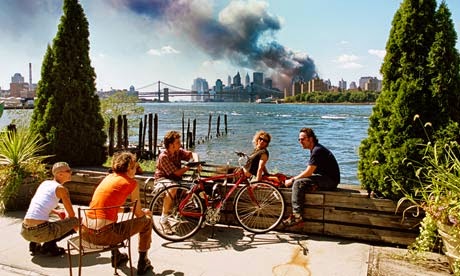 I would be most remiss not to remember that day in September when the skies were filled with pillars of smoke where the New York City Twin Towers once stood before.  It is still too early to make light of the event, but to be honest the day would have completely slipped by me hadn't I seen several mentions on facebook.  Apparently, these casual onlookers weren't so distant as Frank Rich thought.  Walter Sipser, one of the men in the photo, said they were all in "a profound state of shock and disbelief," as many were that day to see such a famous architectural icon go up in smoke.  The photo by Thomas Hoepker just made them look distant.  Even Hoepker seemed to question his own photo, not releasing it until five years later, when it became a "whipping postcard" for pundits and columnists alike looking to seize on anything to justify their moral outrage.  It seems the moral of this photograph is be careful how you are pictured in front of a tragic event.

The 9/11 Memorial Museum is now open, and the new Freedom Tower nears completion.  It would seem that we have reached some kind of closure on the event, but then Islamist extremism rears its ugly head again and all that moral outrage rises to the surface once more with everyone a critic of President Obama's reaction to the rise of ISIL, or ISIS, or whatever it calls itself.  Fox has been flashing videos of George W. Bush telling us "I told you so," and the Republican House is in a huddle with Dick Cheney as to what the best counter plan is to that which the Obama administration finally unveiled this week.  So, it seems we are right back to Ground Zero.

Fox & Friends pondered how hard would it be for Obama to ask Bush and Cheney for advise himself.  These pundits seem to forget Bush's profound statement came "true" largely because he chose to take out his self-righteous indignation on Iraq in the first place.  Even still, Obama did keep Robert Gates on board as Secretary of Defense to provide a bridge between the two administrations, and has been consulting the same military leaders as Bush and Cheney.  I'm surprised Steve Doocy and company didn't blame Obama for 9/11.  As it is, Obama is being blamed for a weak response to illegal immigration, which Rick Perry says has ISIS right at our back door.

Thirteen years later, I find myself pretty much in a similar state of shock and disbelief at how badly we botched the whole thing.  As Al Gore said when the Bush administration chose to go to war in Iraq, we squandered the world's goodwill.  We also squandered the world's trust, which Obama has had a very difficult time winning back.  The sooner we put 9/11 behind us the better.
Posted by James Ferguson at 2:29 PM