I was intrigued by the charges of treason brought against Ezra Pound, and found this fascinating article by Robert Wernick that was published in the Smithsonian Magazine in 1995.  Wernick lays out the situation in lively prose, covering the infamous radio broadcasts, the trial and subsequent internment in St. Elizabeth psychiatric hospital for 12 years until finally released in 1957 with his "condition upon discharge: unimproved."

What I found most amusing was that the Library of Congress selection committee decided to award its first Bollingen Prize to Ezra Pound in 1949.  This incensed Congress, who couldn't believe that an arm of its government could bestow such a high honor on a man of such unforgivable character.  In its rage, Congress revoked the award and abolished the prize.    However, the controversial prize was subsequently awarded by the Beinnecke Library of Yale University, which kept Pound as the recipient of the first prize.  Pound remained at St. Elizabeth enjoying the comforts of his government-paid confinement. 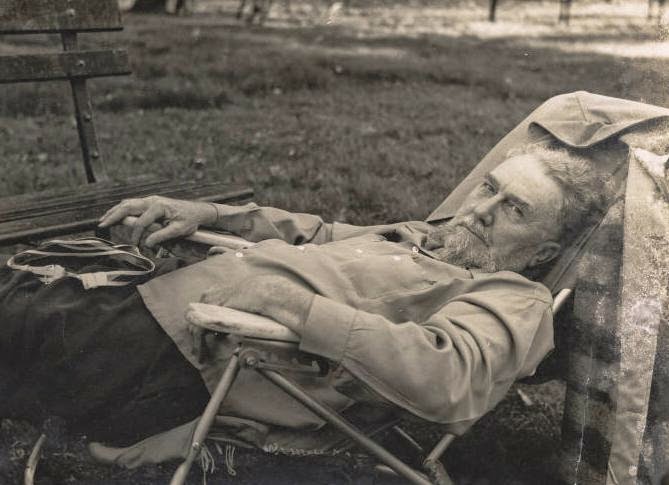 For most, such internment would gnaw at the soul and leave a shell of a man.  Not for Pound, who found his accommodations amenable, and as Wernick noted, entertained visitors, as many as 15 at at time, on a regular basis.  Pound also made friends with fellow patients and administrative staff alike, leading him to quip, "I can get along with crazy people, it's only the fools I can't stand."

One of them was Franklin Roosevelt, who he referred to as "Stinky Rosenstein" in his broadcasts.  Pound felt FDR was in bed with the Jews.  Pound railed against the capitalist world, which he considered controlled by Jews, referring to them as "the cultural stink [that] betrayed the United States in 1863" by keeping up the Civil War, presumably through the banks, which he loathed above all.  The quote is taken from Non-Jew published in April, 1942, which you can find in this collection of his Italian radio broadcasts.  He would later offer some measure of contriteness to Allen Ginsberg in 1967, saying that he was ashamed of his anti-Semitism, regarding it as a "stupid suburban prejudice."

Many years had passed by this point and Pound was near the end of his very long life.  He had outlived many of the writers he had promoted decades before, among them Ernest Hemingway, Robert Frost and T.S. Eliot.  While Hemingway and Frost would turn their backs on Pound, others made a point to visit Pound while at St. Elizabeth.  An exasperated Eliot felt his mentor had no intention of leaving the psychiatric hospital, as it was very comfortable for him. 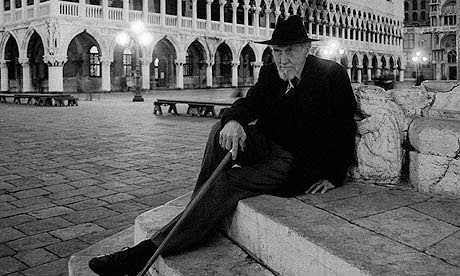 Upon his release,  Pound was forced to confront his wife, his mistresses and his daughter, who apparently fought over him for years before Olga Rudge bore him off to her apartment in Venice, where he spent his last years before being whisked away by a gondola to his deathbed in a hospital, insisting on scaling the stairs himself.
Posted by James Ferguson at 9:52 AM