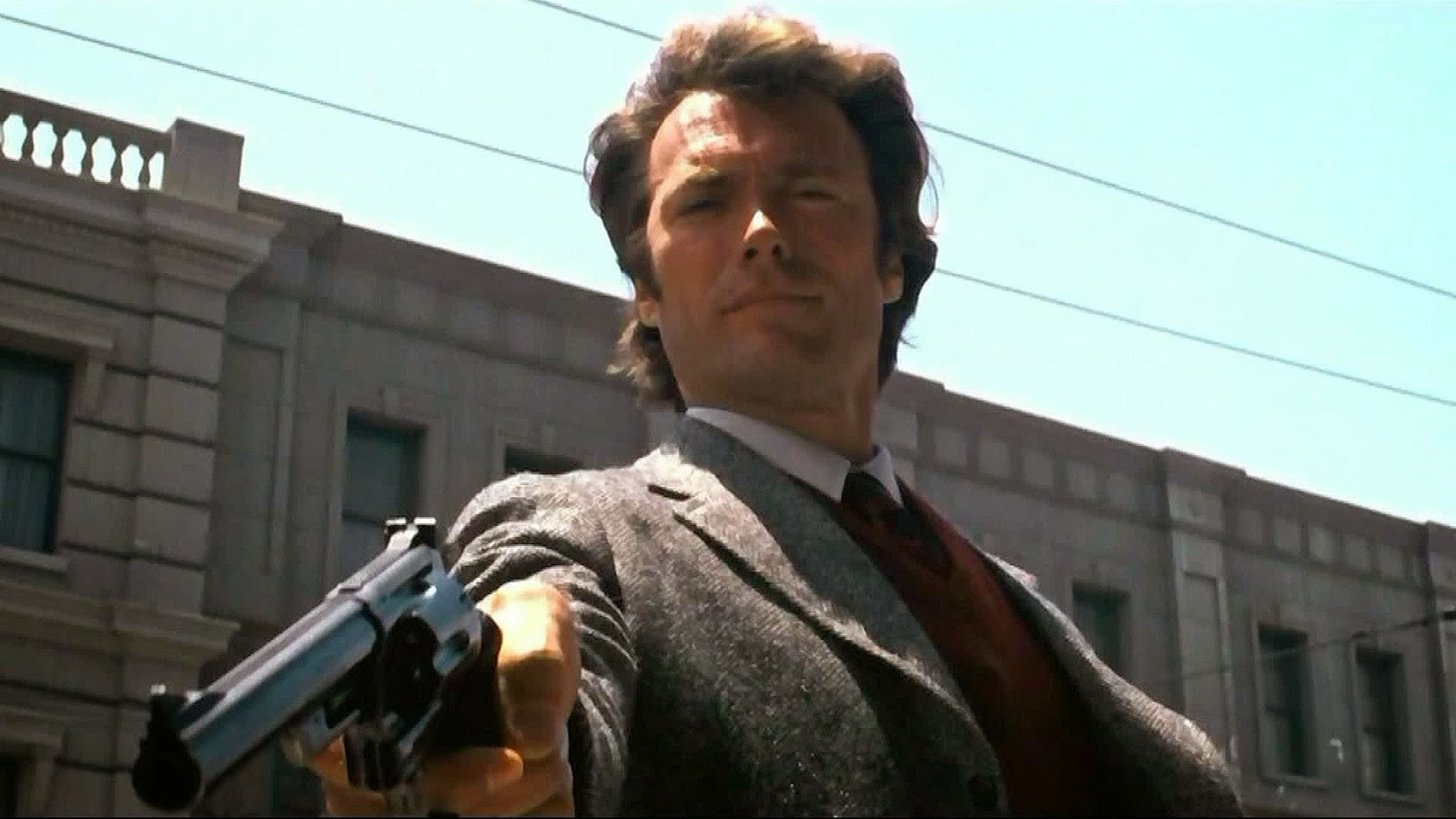 Sergio Leone once said Clint Eastwood had two expressions, "one with the hat, one without it."  He apparently meant it as a compliment but it helps to distinguish (if we can call it that) his move from "the man with no name" to Dirty Harry.

Essentially, they are one in the same character, except that his lead character now has a name to go with the face and is planted firmly on the side of justice.  Of course, you can make the argument that Clint represented "Good" in The Good, the Bad and the Ugly, but there was far more ambiguity to Leone's classic western than there was to the Dirty Harry series, which gave us the quintessential "badass cop."

Clint took over the Dirty Harry project when Warner Brothers failed to get the actor the studio initially wanted for the role.  Eastwood insisted on a leaner meaner Harry Callahan, clearing out all the excess baggage studio bosses imagined in the film.  To make the character "complex," Harry was a bit of a rogue cop.  He did things his way, defying petty regulations, like Miranda rights, as he went after the bad guys with his 44 Magnum, which he subsequently made famous.

The bare bones dialog of the character further endeared him to audiences, much as had John Wayne's similarly limited vocabulary.  You can say both rewrote Teddy Roosevelt's famous maxim, "walk softly and carry a big gun."  Harry was The Enforcer, which was the title of the third installment.  Pauline Kael called the character "fascist," saying the initial movie was nothing more than a "right wing fantasy."  Her bitter review earned more scorn from reviewers than did the movie.  However, she was spot on.

She was even more harsh in her critique of Dirty Harry in the second installment, Magnum Force, saying that Clint had further removed any human feeling from the action melodrama, making it an "almost abstract exercise in brutalization," even though his principal targets were vigilante police officers (not much unlike himself) who act as a modern-day "Untouchables."  He was even regarded as a "hero" by one of the young officers played by David Soul, who would go on to star in the television series Starsky and Hutch.

Whether Clint intended Dirty Harry to be a political statement or not, he became one.  Clint would revive the role four times over two decades, and one can argue that his character, Walt Kowalski, in Gran Torino, is just an older version of Harry Callahan.  Clearly, Clint is comfortable with this role, saying he was doing a picture about the plight of the victim.

The success of the franchise allowed him to bankroll other projects closer to his heart like Play Misty for Me, but it was still Clint without a hat.  Even in his comedies he remained the same weather-beaten cowboy in a beat-up old truck, as was the case in Every Which Way but Loose, but it was nice to think he didn't take himself too seriously.

While many regarded Unforgiven as a "shift" in Eastwood's ouvre, questioning the machismo that had so dominated his earlier efforts, that bravado seemed tempered by age more so than introspection.  He wasn't that far removed from his "Dirty Harry" persona as seen in his follow-up film, In the Line of Fire, hunting down an elusive assassin, played by John Malkovich, which was pretty much the same plot as in the initial Dirty Harry 22 years before.

He had moved from the Nixon years to the end of the Reagan-Bush era with pretty much the same fixation on law and order.  Clint kept his politics relatively close to his sleeve, so reviewers were left to gauge how much of himself he put into his roles.