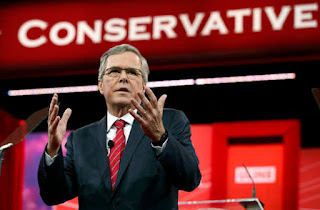 Jeb was always regarded as the "smart one" among Pere Bush's four sons, but it seems that somewhere along the line he lost his edge over his three brothers.  So far, he hasn't distinguished himself on the campaign trail, and now his past statements are coming back to haunt him in a big way.

In 1995, when Jeb first ran for Florida governor against Lawton Chiles, he felt it incumbent upon himself to write a book, as all aspiring politicians seem to do these days.  In it, he gave his thoughts on character and how to better mold it, including a sub-chapter on "Shame."  Jeb felt there was something seriously amiss in our society and that maybe we needed to bring back public shaming to put persons back in line.  He referenced Nathaniel Hawthorne's The Scarlet Letter, which he probably would have been best advised to read again before making these judgments.  Jeb lost his bid in 1995, but won handily in 1999 over Buddy McKay.

Apparently, his thoughts on shaming struck a chord with the Republican-led state legislature, which presented him with a measure dubbed "The Scarlet Letter Law" in 2001, whose principal target was unwed mothers.  Bush declined to veto it, allowing it to become law.  As it turns out, a rather convenient way of ducking the issue, leaving it up to the state court to decide on it, which it did, and the state legislature was forced to revise its shaming law in 2003.

I suppose Jeb thought he had left this little chapter long behind him, but here it is again on the Campaign Trail 2016, and it is not likely to go away.  Given the attention Profiles in Character is getting, it is likely to get reprinted, or at the very least be made available for download so that we can all have a chance to read it.  Not many of us would be willing to plunk down $168.98 for a used paperback copy.   In the meantime, we have to content ourselves with some of the morsels being taken from it and chewed over by the "liberal media."

Jeb was forced to defend himself while touring Europe to bolster his Foreign Policy credentials, which took a big hit on his position on the Iraq War.  He was visiting leaders in Warsaw when the unruly reporters pressed him on the issue.  Once again, he managed to stick his over-sized foot in his mouth by citing a highly disputable figure of over 40% of American children being born out of wedlock.  The actual percentage is 32, but then maybe he was referring to Millennials.   To his credit, he at least put some of the irresponsibility on men who ducked their paternal duties.

Why Jeb ventured into this terrain to begin with is anyone's guess, especially since his daughter, Noelle, has not lived what one could call the virtuous life.  Rather than publicly shame her, he has gone out of his way to lessen her sentence for drug crimes stemming back to 2002, and protect her from the media.  Understandable that a father would do this for his daughter, but smacks of hypocrisy as this was at the height of "the Scarlet Letter Law" controversy.  He apparently deleted a massive number of e-mails concerning the subject.

The odd thing is that Jeb is trying to bring back his brother's campaign motto from 2000, "Compassionate Conservatism."  He has spoken about granting illegal immigrants a path toward citizenship, but seems to have a much harsher view when it comes it teenage mothers and other persons who he deems to have dodged their social responsibilities. 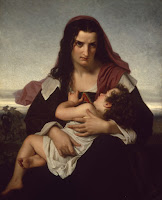 Of course, the latter view fits in well with the religious conservatives in his political party, who would like to see Biblical Law paramount in our society.  The very same views Nathaniel Hawthorne called into question in his novel on 17th century Puritanism with its conflicting interpretations of religious law.  Hester overcame her "shame" and wore the letter as a badge of courage in the end. Today, we see banal attempts to shame children on the Internet that sadly lead to some very dire consequences.  Do we really want to go back to this Puritanical society?

Rather than create distance, Jeb Bush appears to be sucking up to the religious conservatives in his party all over again.  He hasn't learned any lessons over the last 20 years.  Rather, he has bided his time until his opportunity to be President arose, having been forced to live in the shadow of his "dumber" brother.  The only problem is that it appears to be too late for Brother Jeb.
Posted by James Ferguson at 3:26 PM