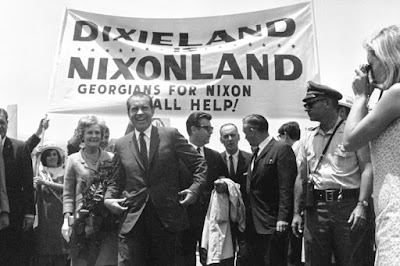 To read Matt Lewis' article you would think the GOP lost its soul when it made its play for the disaffected Dixiecrats in the 1960s with the so-called "Southern Strategy."  I don't think Barry Goldwater actually set out to win the hearts of angry segregationists but that's what happened in 1964, with Barry winning a handful of Southern states in an otherwise "blue tidal wave" that swamped his campaign.

Goldwater championed state rights, but not at the expense of Blacks.  After all, he was an active proponent of a desegregated military, starting with the Arizona National Guard.  But, Goldwater is remembered most for his opposition to the Civil Rights Bill of 1964, and as such garnered the support of Strom Thurmond and other recalcitrant Southern leaders who cast their lot behind him in the general election that year.

This very narrow legacy was subsequently exploited by Nixon and Reagan to great affect.  Racial bating became standard operating procedure in the GOP, turning affirmative action into a rallying cry for not only disaffected white Southern voters but white voters across the country, particularly white male voters.  Oddly enough Nixon had been a supporter of affirmative action while President.

But, Lewis focuses on the disaffected Southern voter, as he feels the GOP has become identified with the redneck vote, and lost its hold on traditional conservatism, which he espouses.  The problem with this argument is that the GOP has lost ground not because of its "Southern strategy" but because it has increasingly become associated with the conservative business oligarchy, which actively promotes an unregulated economy.

This was the case back in the 1920s when the GOP shifted away from its progressive roots and adopted laissez-faire economics.  The Republican Party was no longer the Party of Lincoln and Teddy Roosevelt, but the Party of Harding, Coolidge and Hoover, who over a 12-year span brought economic ruin to the country.  Little wonder Americans were ready for a change in 1932.  Democrats gained the upper hand in Congress and state legislatures throughout the country and, oh yes, the White House.

However, Lewis seems to have found the perfect scapegoat in the unreconstructed Dixiecrat-turned-Republican, blaming all the party's ills on this electoral splinter group.  Have the state policies of Scott Walker, Sam Brownback and John Kasich endeared them to their states?  These guys are carrying out the Koch Brothers agenda, and meeting an angry backlash in their respective Midwestern states.  Yet, two of them are being hailed as potential presidential candidates.

The problem the GOP now faces is that it can no longer rely on the Southern vote to carry the party in a national election.  The battleground states have become Midwest states, rendering much of the South irrelevant, except for the states of Florida and Virginia, which have seen dramatic demographic shifts over the last 50 years.  Even in the last two elections, Obama would have still won without any Southern state.

The South may feel like an albatross around the GOP neck, but only because it made it so by handing over so many key Congressional chairmanships to Southern Senators and Representatives.  The GOP should be rewarding Midwesterners, as these are the states so hotly contended in a national election.  Of course, Republicans still need the Southern states to muster any kind of majority, and as a result are forced to pay deference to its leaders.

However, the problem the GOP faces is not in the South.  The problem is that its message of business as usual no longer resonates with the national electorate, even among the Tea Party base of its party, which has grown vocally dissatisfied with its Congressional leaders.  Teabaggers are just as upset with the trade policies the GOP promotes as are liberal Democrats, as these policies generally lead to the outsourcing of jobs.  The Trans-Pacific Partnership promises to become a much bigger issue in the upcoming election year than Dixie flags and gun racks in the back of pick-up trucks.

The GOP also might want to take note of the solidarity that was shown in Charleston toward the Emmanuel A.M.E. Church, which saw just as many Whites as Blacks gathered in memory of the nine slain parishioners.  We certainly don't live in a post-racial society, but race is no longer a wedge issue that can be so easily exploited in state or national elections.

Maybe, just maybe, the Southern Strategy will go the same way as the Dixie flag -- into museums where they belong.

Posted by James Ferguson at 2:54 PM