The Education of Rachel Dolezal 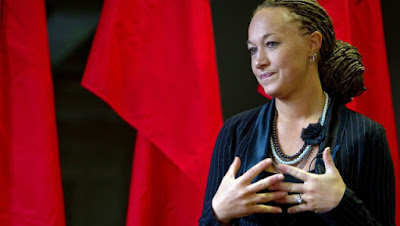 In an odd way, Rachel Dolezal may be learning what it is like to be black now that she has been outed.  She finds herself ostracized from a community she had fully attached herself to and unable to immediately return to the community she was once part of.  The only difference is that TLC or some other cable network is probably already shaping a reality show around her, much like Caitlyn Jenner is due to have her coming out party this Fall.

Even odder is how readily Caitlyn Jenner's transformation has been accepted by the mainstream media, to the point ESPN even gave "her" the Arthur Ashe Courage Award, but Rachel is viewed as a pariah.  Hasn't Bruce appropriated a new gender for his own vanity, without having had to really know what it is like to be a woman in society?  His status as an honored Olympic athlete and his proximity to the Kardashians have allowed him to live what can only be described as a charmed life, but to hear him tell it, he has "suffered" through this mixed gender identity for decades and only now is being able to express his (or her) true identity.

Jelani Cobb tries to make sense of these transformations in this New Yorker article.  He notes that this kind of racial and gender appropriation is nothing new.  He describes the complexity and contradictions in regard to skin color he experienced at Howard University.  Also, the battles over one's degree of "blackness" within the NAACP, which gave rise to black nationalism in the 1920s.

Racial appropriation has been around for a long time.  In the beginning it was mostly for the sake of comedy with white actors donning blackface to make fun of what most audiences regarded as an inferior race.  The sad irony is that many early black performers had to similarly don blackface, as coal black was the preferred color on stage.  When white musicians like Benny Goodman and Ira Gershwin appropriated jazz music, the entertainment industry moved beyond this form of racial degradation.  However, black performers still had to live a double life, enjoying the glory on stage but continuously reminded of their second-class status backstage.

The Jazz Age elevated many black performers to star status, including the great Paul Robeson, who tried to use his status to create greater awareness for the plight his race suffered in America.  His embrace of black nationalism drew the attention of Senator Joseph McCarthy who did everything in his power to discredit the world renown opera singer and social activist.  The constant battle Robeson went through took a huge toll on his health over the years, suffering greatly in his latter years.

Critics of Rachel Dolezal would like to remind us that she doesn't carry this burden, but then how many Blacks living in America today do?  If we look at the highly successful hip-hop artists, notably Kanye West, we can only surmise that he's lived a charmed life and whatever trauma he suffers he brings largely on himself with some of his outlandish statements.

Rachel didn't aspire to be a hip-hop star, like Chet Haze and Iggy Azalea, who have similarly been accused of racial appropriation.  She tried to be an active figure in a black community in Spokane, speaking out against racial discrimination, organizing rallies and teaching Africana studies at Eastern Washington University.  Unfortunately, what the media focuses on is the "hoax" she perpetuated for ten years, as it is easier to draw conclusions from this "objective truth," as Sean Hannity put it, than it is to find out what Rachel really was up to.

She has apparently identified herself as black since she was in elementary school, drawing herself with brown skin.  Her parents later adopted four black children, apparently for religious altruistic reasons.  Conflicting reports of life in the Dolezal household have emerged and have become fodder for the media, as television news has quickly reduced Rachel's story to a reality show.

Sadly, this is how most stories get presented these days.  News has become a form of entertainment meant largely to arouse our emotions, rather than inform us.  No news network does this better than Fox News, which has seized on the story and run with it, casting Rachel Dolezal as an indictment of  misplaced white liberal values.  Rachel's story justifies their myopic view of the race riots in Ferguson, Baltimore and Cleveland, where much harsher realities have played out.

For Conservatives, America crossed the Rubicon with the Civil Rights Act of 1964.  They now like to see us living in a "Colorblind Society," as Ronald Reagan stated in his effort to abolish affirmative action.  These deluded persons seem to honestly believe we live in a "post-racial world" where discrimination only occurs in the minds of those who for reasons entirely of their own making find themselves on the lower rungs of society's ladder.  After all, we have a black president, seen by many as an "objective truth" that anyone can attain what they want to attain in America, regardless of their dubious background.

I'm sure Rachel Dolezal is aware of all this, probably much more so than many of those who are attacking her for the "hoax" she perpetuated for a decade.  I would like to see her story told, but not in the way it is currently being told.