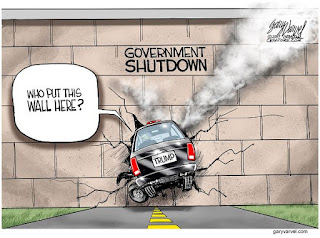 I don't know what's more a joke, the White House or Mitch McConnell trying to blame this shutdown on the Democrats?  The last minute measure the House Republicans tossed in the Senate lap would have only kept the government open for another four weeks, so it wasn't any solution at all, especially given nothing fundamentally changes now that government has "shutdown."  All essential services are still in place.  Even the national parks are still open.  Basically, non-essential workers have a temporary layoff, to be reimbursed later once Congress finally settles on a spending bill.

Yet, Donald Trump and his surrogates tried their best to throw the blame on the Democrats for this impasse, despite his saying time and again what this country needs is a "good shutdown."  Careful what you wish for.

Chuck Schumer took a calculated risk but one that should pay off big time for the Democrats, as the Republicans own this shutdown because of their unwillingness to negotiate immigration reform, too afraid they will be seen as compromised heading into the 2018 midterms.  After all, these assholes did exactly the same thing in 2013, and now they want to cry foul!

The biggest hypocrite of all is Donald J. Trump, who put the 2013 shutdown squarely on Barack Obama's shoulders.  Yet, the assclown doesn't want to take the blame this time despite he being the one to make DACA an issue by signing an executive order in September to revoke it.  So, why is the mainstream press even entertaining conservative arguments?  Any objective view of the situation confirms Chuck Schumer allegation that this is Trump's shutdown.

Unfortunately, news isn't news anymore but a 24/7 reality show we are forced to endure with talking heads representing the extremes of the political spectrum arguing it out on national television.  It is so fucking embarrassing to watch these news networks prostrate themselves in front of us for television ratings!  They figure the only way they can "sell" news is to make it a spectator sport.  So, they allow this "blame game" to go on as long as viewers tune in.  If only it was as entertaining as watching Jessica Lange and company parody "The Name Game" in American Horror Story.

The funny part in all this is how the political landscape is playing out much like the last season of AHS when Ally Mayfair-Richards turned the tables on Kai Anderson and made the world he created under Trump into her own vision, leaving the men to scratch their heads and wonder what went wrong?

Women are now dominating the news cycle, not only winning key state legislative seats but filling in Senate seats where their male colleagues strayed.  The Virginia assembly saw a record number of women win seats, almost turning the assembly in the Democratic favor.  Call it Hillary's revenge, or whatever you like, but Republicans (and for that matter Democrats) are going to see a backlash like they never saw before with a record number of women in Congress next session.

At that point, Donald Trump will have a lot of answering to do and it is unlikely he will be able to squirm out of it like he is trying to do now over the government shutdown.  He's the one that made any kind of compromise impossible with his petty demand for a wall at the expense of DACA.

The last minute gesture on the part of the House to add child health care to make it look like the Democrats were the ones throwing the baby out with the bathwater was so pathetic that even some Republicans had to do a double take.  Jeff Flake openly admonished his fellow Republicans for this bit of grandstanding, and three other Republican Senators similarly said no.  Even Mitch was forced to admit defeat, as the best he could muster were 50 votes, 10 short of the 60 needed to carry the bill. But, of course, he blamed the Democrats.

They can play this blame game as long as they want, it won't change matters.  Trump has unleashed a fury among women voters that is not likely to abate between now and next fall.  Not only that but he has managed to unite minorities against him with his racist comments and tweets that will spell the doom of many Republican candidates vying for Congressional seats.  It's the "perfect storm" Republicans were hoping to avoid, but now find themselves sailing straight into it in November.