The Lost Art of Forehead Sweat 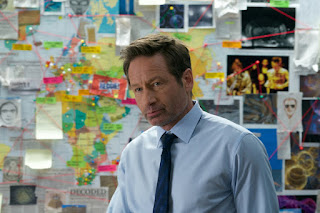 I first heard about the "Mandela Effect" from my daughter.  I thought she meant Mandala but she insisted it was Mandela.  Sure enough a "paranormal consultant" penned the term in 2010 to describe how alternate memories can be retained by perhaps thousands of people.  It doesn't matter that he was released from prison in 1990, a major story covered by all the international press, or that he went on to become President of South Africa from 1994-1999, many persons insist they saw television clips of his funeral back in the 80s.

So, were there two Nelson Mandelas or is it just memory playing tricks on us?  This is what The X-Files explored in its most recent episode, The Lost Art of Forehead Sweat, which will renew your faith in Chris Carter.   It was a humdinger of an episode that has a lot of fun with the concept of "false memory."

The best character is Dr. They, a mysterious little man who long ago figured out how to play with memories and reconstruct the way we view the past.   It no longer becomes our memory playing tricks on us but rather an ominous government plot to foil our memories so that we lose all semblance of what is real and what is fake.  At least this is the way Reggie explains it, a man who insists he worked with Mulder in the early days of The X-Files before Scully pitched up to spoil the fun.

This sounds a lot like "gaslighting," another recently coined term to describe when false information is presented to a person to make him doubt his own memory.  It has become so pervasive that psychologists are warning us to not succumb to this very dangerous game.  The Mandela effect is apparently more benign, simply one holding onto a memory of an object or event that in the end turns out to be a little different than what we imagined.  Nelson Mandela did die and had a widely televised funeral, but not until 2013.

I suppose the two can easily become blurred.  Our susceptibility to the "Mandela effect," allows us to be easily "gaslighted," reaching a point where we lose all semblance of reality and end up being carted away in a 1960s vintage ambulance to the sanatorium.   In the past, psychologists would have called this schizophrenia.

We do appear to be living in an ever more fragmented society, in which it is more difficult to discern what is real and what is fake.  This is especially true when we see multiple narratives emerge to describe past events.  Kind of a Rashomon Effect that refers to Kurosawa's great film, in which a murder is described in multiple conflicting narratives.  Of course, you can just as easily call it the Faulkner Effect, as he used this technique repeatedly in his books, most notably The Sound and the Fury.  The technique is also quite prevalent in Russian literature, particularly Dostoevsky.  With no objective truth available to us, the best we can hope for is a consensus opinion.

Unfortunately, that seems hard to find these days.  Even when 97 out of 100 scientists say that man is responsible for the climate change taking place, the three stray scientists carry a lot of weight among those seeking to refute this consensus opinion.  All you need to do is come up with a compelling conspiracy theory.

Of course, this what The X-Files thrives on.  For the most part, Chris Carter is having fun here.  In the first episode of the season he mocked the moon landing, and played on our deep-seated fear of vaccinations as a means of spreading an alien virus through the population.  Most viewers take it for what it is -- entertainment.  Alas, there are many persons who really believe these conspiracy theories, making them easily susceptible to manipulation, which ultimately is what Chris Carter tries to show.

It is probably no coincidence that Fox News emerged from the same network that first gave us The X-Files back in 1993.  It seems that Roger Ailes saw the perfect format for disseminating a new strain of news, an alien virus if you will, that would easily infect a gullible public anxious for a conservative interpretation of events.

Conservatives had lost the White House and felt that a new liberal order was being installed in this nation, given how the mainstream media fawned over the Clintons.  Fox News was going to set the record straight, or at least offer an alternative version of events that would satisfy conservative viewers the same way The X-Files did conspiracy theorists.   What seemed like a farce soon grew into a major news network, eclipsing the other news networks within ten years time.

Fox News thrives on the Mandela effect, gaslighting, Rashomon effect and other post-modern forms of manipulation to twist events to the point they are no longer recognizable in any objective sense.  Fact is no longer fact, but just another opinion.  So what if 97 scientists assert that man is causing global warming, I will find three who say climate change is either non-existent or just a cycle of nature, including John Coleman, the guy who founded The Weather Channel.  He called climate change baloney.

With the advent of the social media in the new millennia, anyone could turn a conspiracy theory into a blog and get thousands if not millions to subscribe to his or her point of view.  Objective truth now seems a quaint idea, relegated to the day academic science and history journals were seen as the ultimate authority.  Now, we have "paranormal consultants" offering us theories on how alternate realities lead us to have different impressions of events.  There really may have been two Nelson Mandelas, one who died in prison in the 1980s, and another that went onto become President of South Africa and died in 2013.  There may even be more Nelson Mandelas floating out there in other dimensions.  Fiona Broome has many subscribers, and to read her bio is a major influence on pop culture and pop psychology.

It would be nice to think that in an alternative reality Hillary Clinton won the electoral college and that the US was spared Donald J. Trump.  Better yet, Trump died in the early 1980s by falling off the yet-to-be-completed Trump Tower and and we never had to be subjected to his malignant narcissism.  Sadly, we are forced to reconcile ourselves with the reality we live in.