Our Man in Jerusalem 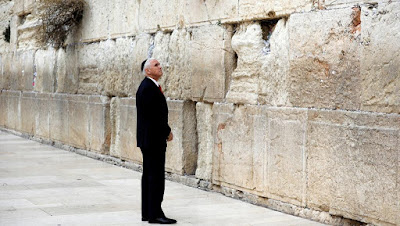 Mike Pence was in Israel these past few days, assuring the government of America's unwavering support.  The trip served no real purpose other than re-stating the Trump administration's position on Jerusalem and offering a few photo opportunities for our Vice-President, although he seemed to be pondering the enormity of it all at the Western Wall before returning to the United States.

It is safe to say there will be no meaningful negotiations over the next three years.  To be fair, Obama didn't do much in this regard either.  Ever since the War in Iraq and the Rise of ISIS, Palestinians have been relegated to the back pages of political discussion.  Hard to believe that at one time "Peace in Israel" was the number one foreign policy issue.  I guess Dubya did succeed in shifting American FP a little further to the East.

Mahmoud Abbas and other Palestinian leaders have no time for Mike Pence or Jared Kushner or anyone else Trump sends to the Levant.  Abbas was in Brussels seeking assurances that the EU would continue to play a role in peace talks and back recognition of East Jerusalem as capital of Palestine.  Trump wants to sell the Palestinians some land outside Jerusalem instead, oblivious to the fact that is where Ramallah is located, which serves as the Palestinian Authority's provisional capital.

Unlike Israel, Palestine held up to its end of the bargain by leaving Jerusalem a "corpus separatum."  Israel has been treating Jerusalem as its capital virtually since independence, with only the embassies officially located in Tel Aviv, although many countries have consulates in Jerusalem.

Pence gave a timetable for moving the US embassy to Jerusalem.  The first country to do so.  The Trump administration imagines the move will take place next year, and I'm sure they will get the authority from Congress on this one, since it has long supported the move.  If nothing else the state department can sell off their possessions in Tel Aviv to pay for the move, similar to what was done in moving the embassy in London.

None of this furthers the path toward peace in the region, but of course this didn't stop Magic Mike from hailing the negotiations skills of his Chief.  Not that Trump has made much effort at negotiations himself other than greeting Abbas at the White House last year.   Since then it has been all Jared, who has done more in promoting his business interests in Israel than he has negotiating any settlement.  But, he and Ivanka sure do make a dashing couple! 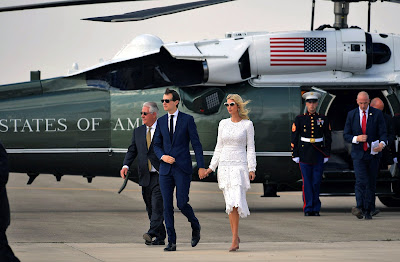 I suppose this all goes with the role of being in the White House, and if nothing else Trump likes to keep up appearances.  He can sell whatever comes out of Israel to his adoring conservative public because none of them care whether Palestine eventually becomes a state or not.  Announcing the embassy move to Jerusalem played very well among his electorate.

As for Mike, his political status has eroded over the past year.  You might remember he was greeted with open arms when he first came to Europe last February, but he is pretty much seen as Trump's fool now.  At this point, his reassurances ring hollow as foreign leaders have lost all hope they can negotiate with Trump's emissaries in any meaningful way.  Whatever his surrogates promise, Trump is sure to tweet the opposite the next day.

Israel is one of the few countries where the Trump administration is warmly welcomed, as Donald and Bibi are pretty much on the same page.  Netanyahu even had a new train station named after Trump upon formally recognizing Jerusalem as the Capital of Israel.  Can't beat that!

Posted by James Ferguson at 9:38 AM