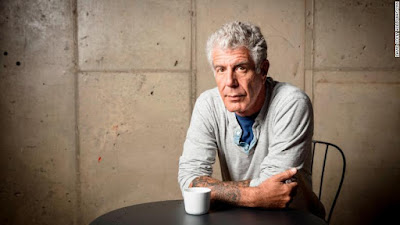 When you die, you are immediately relegated to history, but it seems the good folks at CNN struggled mightily to keep Anthony Bourdain alive.  The teary tributes poured out on the screen.  I imagine if Anthony could have seen it, he would have gagged, as he didn't strike me as much of a sentimentalist.

His death is a bit of a jolt, but was he really that important a figure?  So many persons talked about how he opened up new territory on his travel shows:  sitting down with Bobby Seale at Miss Ollie's in Oakland and reminiscing on the Black Panthers, or taking us on a culinary tour of Gaza.  Food and politics get intermixed as in the makloubeh he illustrated in his Gaza segment.

Most of us have had to battle with our own families over the dinner table and know full well what it means to inject politics into a holiday meal, but here was Anthony making it seem so easy.  He brought contentious issues literally to the dinner table, casually talking about them as though we shouldn't give it a second thought.  An interesting style that found its mark.

He's not alone in this.  Conan O'Brien brought a similar disarming approach to his travels to Israel and Palestine last year.  You could say he was inspired by Bourdain, but he gave it his individual stamp.  He's had similar trips to Cuba and other geographic hot spots.  But, Bourdain is a genuine globetrotter.  He's been all over the place in his culinary adventures for the Travel Channel and CNN, giving us juicy insights should we ever want to travel that way.

What he gives us is food with an attitude.  It's been his way since he burst on the scene with Kitchen Confidential at the start of this millennium.  He quickly took his show on the road and never looked back, which makes us wonder why he should decide to off himself at the pinnacle of his career.  He was just shy of 62, which many consider the new 40, keeping himself healthy with jiu jitsu and his younger soulmate, Asia Argento.  Maybe there was nowhere left to go?

Best not to try to make sense of these events.  Obviously, Anthony harbored his share of demons.  He was about the same age as Robin Williams.  If he battled depression, he kept it to himself.  Looking back, a few persons found harbingers as one always does in retrospect.  But, we all thought Bourdain would cantankerously grow old, not realizing how hard it is to keep turning out these shows.