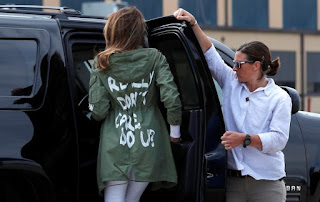 Anyone remember anything about the North Korea summit?  It seems like Trump's great foreign policy coup is completely forgotten in the wake of the border crisis unfolding before our eyes.  The protest to the separation policy grew so loud that His Trumpness was forced to retract his edict, and send Melania down to Texas to show that he cared.  Only problem is that her jacket said just the opposite, so now the media is trying to figure out what the hell is going on, as kids get tossed back and forth between detention facilities, with only a relative handful being reunited with their parents.

The jacket has gotten the most attention, given the wacky theories that have emerged, such as Zara reawakening the 1930s in the messaging on their clothes, and that Melania is a willing accomplice.  Of course, His Trumpness dismisses such conspiracy theories, saying it was just a dig at the media.  Whatever the case, the media is not letting go, and neither are celebrities who have donned their versions of the jacket to mock Melania.

Meanwhile, no one really knows where the kids are.  There have been reports of reunification, with parents chasing all over the place to find their kids, but for the most part these children remain caught in the system.  Like so many of Trump's actions, there wasn't a lot of thought put into this separation policy, and now that he has to undo it, there is no plan in place to carry it out.  It does appear that some families are being reunited, only to find themselves head to Ft. Bliss to await processing.  Jefferson Beauregard Sessions is determined to carry out this zero-tolerance policy on immigration, whether it be illegals or asylum seekers, who have become lumped into the same group.

All this is making His Trumpness angry, who has taken to twitter and campaign rallies to vent his rage against Washington.  In his mind, this is all the Democrats' fault for not passing an immigration bill when they had Obama in office.  Of course, he can't be bothered to remember that it was his own House Republicans who stymied an immigration bill in 2013, making sure it never got to Obama's desk.  One he lobbied against at the time.

Most Republicans never wanted an immigration bill because they could so effectively use immigration to rile up their masses on the campaign trail.  Now that they are faced with the actual challenge of doing something about it, they would rather pass the buck to the Democrats, which may very well be the case this November.

The House attempt at passing a draconian immigration bill failed miserably with more than 40 Republican dissenting.  Not that it ever would have gotten through the Senate if it had passed, which Trump grumpily noted.  It was more a loyalty test than anything else.  The House is littered with Trumpkins, all vying to get Il Duce's attention during the primaries.

Trump figures he can thwart history once again by pulling off an epic "red wave" this November.  Fox has been pushing this surge theory for the past couple months to counter all this talk of a "blue wave" sweeping the country.  It doesn't matter that the Democrats have turned over far more seats in state legislature special elections than have the Republicans, the success of a handful of Republicans retaining their House seats was enough to indicate all is well in America.  Trump still considers himself five-for-five, discounting "Lamb the Sham's" surprising victory in Pennsylvania.  He took time to bash Conor Lamb once again on twitter, still smarting from this one unrecognized loss.

The Republican National Committee is not as confident, funneling huge amounts of money into the election cycle, hoping to offset the grassroots swell favoring Democratic candidates.  Ever since Trump took office, Democrats have been swinging seats across the country.  The biggest shock was in Virginia, where Democrats virtually created a split in the general assembly.  They fell short by a coin flip, after gaining 16 seats in the 2017 statewide election.

Wisconsin, Minnesota and other Midwest states are also swinging back into the blue column in special elections, after Trump broke the "Blue Wall" last November.

Tariffs, a draconian immigration policy, rising oil prices and a stagnant Wall Street all seem to be conspiring against Republicans in the midterms.  The tariffs made no sense at all, and Republicans are still trying to get Trump to shift course but to no avail.  This is leading to a backlash from Canada, the EU and China, which is sure to impact vulnerable Midwestern states, where Republicans were hoping to score big wins this November.

Republicans didn't expect immigration to blow up in their face either, but thanks to Trump it is now a yuge albatross around the necks, and Melania didn't make it any easier with her inflammatory jacket.  They can't afford to accept a compromise that favors the Democrats, which is why they are scrambling so hard to come up with something that will at least bring all their US Representatives on board, and hopefully sway a few edgy Senate Democrats who see their political fortune in peril, if a red wave were to actually appear on the horizon.