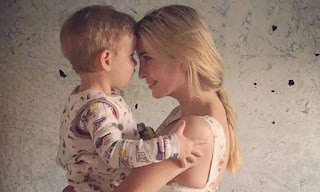 It sounds like a title from a dimestore crime noir novel, but Samantha Bee finds herself under fire for impugning the motherhood of Ivanka Trump.  It came at the end of her segment on the plight of illegal immigrant children being stripped from their parents and being placed in detention centers, whereabouts unknown.  However, it quickly became the sole takeaway from her Wednesday episode.  Samantha has since apologized, but no matter, the Roseanne fans want her head to make up for the loss of their favorite show.

Funny that the same people who are so quick to maliciously impugn others, get so bent out of joint when someone goes after their icons.  Not sure why Trumpkins should revere Ivanka, as she is the liberal one in the family.  She has even gone so far as to claim she is the voice of moderation in the White House, which is why Samantha so brusquely singled her out to get her to do something about this heinous immigration policy.

In this incidence, Trump claims he is just following the same program of his predecessor, even if his justice department has ratcheted up detentions ten fold in the past year.  Jefferson Beauregard Sessions is aiming at a 100% prosecution rate on illegal immigrants, including children.  Of course, Congress could step in and pass a long overdue immigration bill that would address many of the issues concerning illegal immigrants, but this being an election year, again, fat chance!  Besides, they would need the president's signature on it.   Better to blame the Democrats, even if there is no basis for his allegations.

Is Ivanka to blame for her daddy's harsh policies?  The most she can be blamed for is an inopportune shared cuddly image of her with her two-year old son, Theodore.  It was just bad timing.  Any other time, like say Mother's Day, everybody would have been gushing over the rare glimpse into the first daughter's private life, but now she finds herself being publicly shamed for it.

I imagine she wanted to show off her kids after the all attention she saw Little George and Charlotte get on the other side of the pond during Harry and Meghan's wedding.  She was just trying to engage with the public like a royal princess would, proud of her little charge.

Instead, she should be engaging in real issues that affect all mothers, according to Samantha Bee.  Ivanka can get closer to Trump than any other mother can get.  Surely, she can impress on him the importance of keeping families together, rather than letting them be ripped apart at the border for having the audacity to seek green pastures in America, like his parents once did.

Hard to believe, Donald Trump is only a first generation American.  Ivanka's own mother is an immigrant.  His Trumpness's current wife is also an immigrant, who relied on his connections to get a much sought after H-1B visa to stay in America.  Apparently, we are in short supply of supermodels here.

Sad fact is that Ivanka has very little influence over her father, otherwise we would never had him as president.  I don't think for one moment she wanted him to actually run for office, although it has greatly benefited her clothing line. But, we got him anyway, as hard as it is to still accept.

In less than two years, the Donald has managed to turn the United States into Trumpistan, his version of a Central Asian autocracy, where family comes first and all others in the administration are left to explain this nepotism to what he considers to be his adoring public.  Donny Jr. and Eric are the American version of William and Harry.

Meanwhile, borders are being sealed, so that there will be fewer persons to take advantage of all the "loopholes" in our lax immigration laws.  He has ICE doing house to house searches for any illegals hiding in our midst.  These are the kinds of policies you would expect to see in a Caucasian country.

Ivanka, like a good princess, wants her cake and eat it too.  She expects to have all the perks that come with being part of the First Family of Trumpistan, but won't take any responsibility for the actions emanating from the Royal White House.  Hence, feckless.  As for cunt, Sally Field thinks it makes the statement an oxymoron, as cunt represents empowerment, not fecklessness.