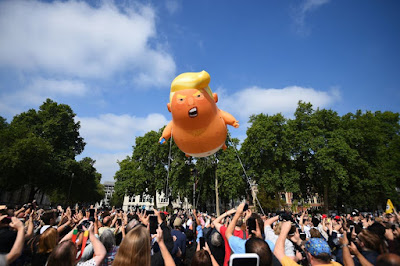 What have we learned about Trump on his latest European trip?  He doesn't like women, at least those who would be consider his peers.  He doesn't like immigrants, especially Pakistanis who become important mayors.  He doesn't understand that you are supposed to come before tea time, leaving the Queen checking her watch on the royal stand.  And, he hates to be mocked, but then we already knew that.

Trump left a lot of persons scratching their heads this time around.  Determined not to be a wallflower again, which he was when he attended the NATO summit last year, he immediately ripped into Germany at breakfast the first day, claiming that it was "captive" to Russia because of the Nordstream pipeline.  This had less to do with Germany's reliance on cheap Russian natural gas than it did his animosity toward Angela Merkel, who had stolen all his thunder at the last NATO summit.  He was determined not to let that happen again.

Then came the infamous Sun interview, which he now discredits as "fake news."  In it, he lambasted Theresa May's Brexit deal, offered Boris Johnson as an alternative PM and lashed out Sadiq Khan for allowing the Baby Trump blimp to fly over London.  If that wasn't enough, he lamented that immigrants were destroying Europe's culture, a rather thinly disguised attack at first generation Pakistani-Briton Khan becoming the mayor of London.

Trump walked back most of what he said in that notorious interview during his press conference at Chequers, but stuck with his harsh stance on immigration, calling it "a very negative thing."  To her credit, Theresa May challenged him on this, saying immigration is what makes Britain great, but Trump was having none of it.

These incendiary comments are a direct reflection of the extreme right-wing populist parties in Europe.  Steve Bannon was also in town stoking this rhetoric among those who would listen to it.  Trump and Bannon are stirring the embers of these national parties, hoping to get similar election results to what happened in Italy recently.

All this feeds into Vladimir Putin's hands, whom he is scheduled to meet with on Monday in Helsinki, despite an ever growing chorus that he should cancel this "summit."  The reason being that Trump's DOJ issued a scathing indictment on 12 Russian GRU agents it held directly responsible for hacking into the DNC and other servers, as well as attempting to influence the 2016 election with fake social media sites.  The Republican response is to condemn Rod Rosenstein.

Trump's response is to put all the blame on Obama for not responding what it was first suspected Russia was tampering with the 2016 election, but as Joe Biden points out, Mitch McConnell was unwilling to be part of a bipartisan statement condemning Russia, so Obama chose to publicly scold Putin instead.  Trump has taken virtually no action against Russia other than expelling some low level diplomats in the wake of the Novichok poisoning in Great Britain, which Russia responded in turn by expelling low level American diplomats.  Trump still regards the ongoing FBI investigation into Russian election meddling as a witch hunt, repeating it in his press conference with Theresa May.

Our President has repeatedly shown his admiration for autocratic leaders over democratic ones.  What's worse, he has particular scorn for democratic women leaders.  Why caught our first glimpse of this the way he treated Hillary Clinton during the campaign, particularly in the town hall debate, where he literally stalked her around the stage.  It seemed so crudely comical at the time, but here he is now stalking Merkel and May.

We all know his scorn for Muslims, so it is not surprising that he would have little regard for Sadiq Khan.  This feud has been ongoing since the 2016 election campaign when Khan spoke out against Trump's proposed Muslim ban.  But, Trump took it to a whole new level by publicly condemning immigration in Europe, claiming it has led to an increase in crime and terrorism in Germany and Britain.  Trump promotes the idea of a White Europe as he does as a White America.  In his mind, Muslims need not apply.  They have irreparably "changed the fabric" of Europe, namely by running for public office.

In his mind, Britain would be much better off with Boris Johnson than it would Theresa May or Sadiq Khan.  He tried to walk this back somewhat in his press conference, but still lavished praise on Johnson at Theresa May's expense.  Johnson is part of the Russian propaganda effort that led to the Brexit vote, having been a frequent contributor to RT, as was his comrade-in-arms Nigel Farage.

And you wonder why so many Britons mock him.