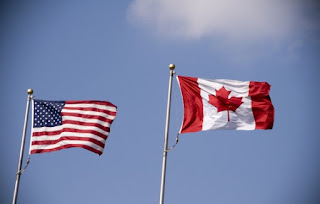 Today is Canada's National Day and for Americans that's not a good sign.  New tariffs kick in which will have a big impact on American manufacturing and agricultural industry.  The United States and Canada haven't been at odds like this since the early 1970s, when President Nixon declared the "special relationship" between the two countries dead in the wake of Prime Minister Pierre Trudeau's decision to diversify Canada's economy, so that it was no longer so dependent on trade with the US.

Eventually, the US forgave Canada for its insolence, but a love-hate relationship has remained, especially when liberal leaders come to power like Justin Trudeau.  We tend to prefer conservative leaders, like Stephen Harper, who preceded him.  It was Harper who pushed the Keystone Pipeline to get his ugly crude oil from the tar sands of Alberta down to Houston refineries, which Republicans tried in vain to get through Congress.

Donald Trump wasted no time approving the deal his first 100 days in office.  As deals go, it was a pretty bad one as far as American interests go, as all we did was pay for most of a 2150-mile pipeline and refine Canada's crude for export, making us nothing more than a middle man.  I'm sure the pipeline builders and refineries got a cut, but it did little to boost our economy, something His Trumpness was so intent on improving.

For Trudeau's part, he retained his end of the deal, much to the chagrin of the liberals who elected him, as the project was too far along to turn back without ruffling a lot of feathers.  Instead, the young prime minister focused his attention elsewhere.

This is why it came as quite a shock to see the US placing tariffs on steel and aluminum.  The US imports the bulk of these metals from Canada, as it does its foreign oil.  Trump seemed oblivious of it at first, thinking he was taking punitive actions against Mexico, from which we get 11 per cent or our steel.  Canada is 20 per cent.  Brazil and South Korea also provide more steel than Mexico.  When Trump was made aware of this, he doubled down on the tariffs so as not to appear the fool.

Congressional Republicans were dismayed by his actions, but did little to stop him.  Instead, we got Wilbur "The Talking Campbell's Soup Can" Ross to explain to us how little these tariffs would impact us, noting the small amount of aluminum in the cost of a can of Campbell's Soup.

Yet, auto builders and other manufacturers rely on this cheap steel to keep their costs down, and now that they will pay higher prices, they will either be forced to make cuts to compensate for the tariffs, or pass along the cost to the consumer, which is generally how tariffs work.

Trump thought he was bringing steel back to America, but the US has long scaled back on steel and aluminum production.  You would think we would be recycling these metals, especially aluminum, but much of the aluminum waste is shipped abroad.  Same with plastics.  It's cheaper to have China or India or Brazil recycle these materials and ship the finished products back to us than it is to do it ourselves.  So much for self-sufficiency.

The question remains why should Canada be penalized for our own shortfalls?  If we really wanted to be self-sufficient, we could have been a long time ago, especially with so many "right to work" states.  Instead, we became a global player, given our many interests abroad, not least of all Canada, our third largest trading partner behind the EU and China.  Why sacrifice this "special relationship?"

This is what has Canadians scratching their heads, and many Americans as well.  The border has long been a porous one, but apparently no more.  As this trade war heats up, so will ugly sentiments between the two countries.  Canada has vowed not to back down, and Trump appears determined to carry this trade war to the bitter end, like he would one of his petty fights on The Apprentice.

The sad part is that many of his followers are willing to stand behind him, even go to war with Canada if necessary.  In their mind, Trump can do no wrong.  Whatever facts you lay before them are discarded, as they simply won't heed any information contrary to His Trumpness's tweets.

What Congressional Republicans have to do is find a way in which Trump can retreat with dignity from these tariffs and restore the balance between the two countries.  We've long considered Canada our brother in arms and there is no reason to jeopardize this special relationship over one man's overblown ego.