Let Them Trumpet His Name 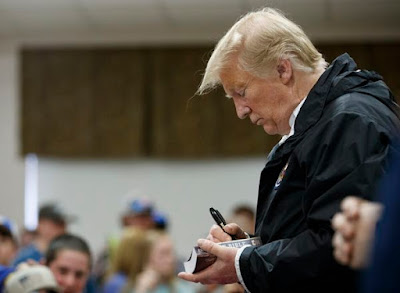 People are making a big fuss over the Donald signing all those Bibles in Opelika, Alabama, the site of a devastating tornado, but he was literally signing anything placed in front of him, including a woman's bare chest.  It's not like he put much thought to what he was doing.  The persons who thrust these Bibles in front of him did.  This is what we should be concerned about.

There is a significant portion of the conservative religious community that thinks Trump was sent by God to take back their country from the liberal infidels.  Leading evangelists like Jerry Falwell Jr. and Franklin Graham have been the most supportive, coming up with all kinds of excuses for his inexcusable activities.  Falwell makes no apologies for his support, saying that religious conservatives should stop electing "nice guys," fighting fire with fire with the liberal fascists.  Odd for a man who just recently invited Alexandria Ocasio-Cortez to Liberty University after calling her stupid and a liar.

This Toxic Christianity, as Harriet Sherwood calls it, has spilled over into the social media and the broad-reaching tele-evangelist community.  Sherwood quotes Bill Leonard, a professor of church history, who says that Liberty University was established for the expressed purpose of creating "generations of rightwing Christians who would run for public office for everything from dog-catcher to US President."  These modern-day Christian soldiers are very active in stirring up the base of the Republican party, that is now predominantly religious conservative.

It's not surprising they flock to someone like Trump, who projects himself as an autocratic leader.  After all, this is the basis of the Bible.  God brooked no compromises, and he made it expressly clear to Moses and his son Aaron that they should lead by stern example, listing the laws and their harsh penalties in the following chapters.   These are Old Testament Christians, who adhere more to the Books of Moses than they do the teachings of Christ, which were much more tolerant.  Apparently, Jesus wouldn't have a place in Jerry Falwell's world.  Instead, we get a modern-day Moses, Ten Commandments style.  All though looking at the clip, Trump is more like Dathan, played by Edward G. Robinson.

Religious conservatives have been raised on movies like Cecil B. Demille's The Ten Commandments and Mel Gibson's Passion of the Christ.  There is a thriving movie industry built around religious themes that has become even more popular in the Age of Trump.  Gibson showed there was a huge market for his Passion that went largely untapped, as his movie reaped millions at the box office after being turned down by major distributors.

It doesn't matter that Gibson is a deeply flawed man, or that Trump is even more deeply flawed.  In religious conservatives' minds, God chose flawed men to deliver his message, citing that Moses had killed an Egyptian, which led him to wander out into the wilderness and find God, as well as a wife and children.  Gibson repented for his many sins, the singular hallmark of Christianity, and founded a church to deliver his traditionalist message.   So far, Trump has not confessed to any sins, much less asked for forgiveness, although he has had numerous opportunities to do so.

Yet, religious conservatives accept Trump just the same, largely because he came out against abortion and gay rights.  He even went so far as to issue an executive order to purge the military of openly transgender soldiers, despite there being no expressed need to do so, although that decision is currently being litigated.

His past track record suggested he was a much more open-minded man.  He even courted transgenders like Caitlyn Jenner on the campaign trail, saying she could use the ladies room in Trump Tower anytime.  Associates and friends from before he was President said he had no barriers in his enterprises.  Women especially enjoyed prominent positions in his organization.  He was even good friends with the Clintons, praising Hillary as late as 2013, for her services to the country.  He also was much more articulate then.

Trump always wanted to be President, but couldn't find the right path until 2015.  He saw how vulnerable the Republican Party was and how desperate its electorate was for a strong leader, so he sought to fill that gaping void with his big mouth.  No one gave him a chance until Jerry Falwell Jr. invited him to Liberty University to give a speech in January, 2016, and endorsed him before the first primary in February.  Trump got off to a slow start but by March was scoring big victories in the primaries, particularly in the South where support for him was the strongest.  As other candidates dropped out, Trump only had Ted Cruz to content with, which the Republican orthodoxy in no way could abide by, so they threw their support behind Trump as well.

While many credit Roger Stone, Steve Bannon and Paul Manafort for engineering Trump's audacious victory in November, 2016, a lot of credit should go to Falwell for making Trump acceptable to the base of the Republican Party, when religious conservatives were leaning toward Ted Cruz and Ben Carson, both self-professed Evangelical Christians.

This was a major turning point for the religious conservative movement.  Before, it had expected its political leaders at the very least to attend church, but here they were supporting a man who could probably count on his tiny hand the number of times he had been to church or opened the Bible for that matter.  When he tried to quote verse, he stumbled badly, but would bounce right back from these missteps by effusively praising the religious leaders around him.

Trump was the classic carnival barker you would find in the late nineteenth or early twentieth century.  He understood that people wanted to see excitement, so he created excitement by making big issues out of non-issues, like the wall, and turning the Republican primaries into the biggest show on earth by defying all norms.  No one could take their eyes off him.  He was on the news 24/7.  People were amazed that this gross caricature of a man could command so much attention.

As we are finding out with the Cohen testimony, it was always an act with Donald Trump.  He had no set convictions or beliefs.  He chose whatever suited him at the moment and put his full breath into these beliefs.  It was the case when he championed the reconstruction of the twin towers over the new design for the World Trade Center.  Likewise, his decision to become the leader of the Birther movement when he toyed with running for President in 2011.  Don't ask for any of it to make sense because it doesn't.  He just as quickly sheds these beliefs as he did embrace them.

Yet, religious conservatives continue to embrace him, offering up their bare chests to him and thrusting their Bibles in front of him to sign, on the cover no less, as if he is God himself.  You have to wonder if Jerry Falwell Jr. privately considers if he created a monster, or at the very least allowed this monster to become the face of the religious conservative movement.  Either way, he owns him. He's the one who gave him a forum in front of this large following and to become its de facto leader come hell or high water.  There is no sign of these faithful abandoning him no matter what Michael Cohen or anyone else has to say about him.  As far as they are concerned, he is their Moses.  Let them Trumpet His Name.