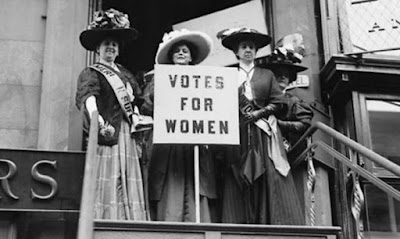 International Women's Day is now universally celebrated but for the longest time was seen as a Soviet holiday.  It didn't matter that the idea originated at the International Socialist Woman's Conference in New York in 1910, it wasn't until 1975 that the United Nations adopted it the world over.  It has been stripped of its socialist origins and turned into a day to celebrate women's achievements.

Nonetheless, many of those achievements go unrecognized.  It took decades for the public to acknowledge the role women played in science and technology, largely seen as a male frontier.  Hidden Figures called attention to some of the women who worked for NASA in the 1960s and Margaret Hamilton has only recently received attention for the pioneering role she played in landing Neil Armstrong and Buzz Aldrin on the moon.

In reading the Books of Moses, it is no surprise women are largely ignored.  God didn't seem to have much time for women other than for procreation.  Sex and menstruation were seen as unclean activities and when it came time to doing a census of the Israelites, only men above the age of 20 were counted.  Throughout the Old Testament, you rarely hear of a woman by name, they are seen largely as the property of man, as noted by Kate Millett in Sexual Politics.

This all changed with the socialist movement of the 19th and 20th centuries.  Women demanded their right to be counted and to vote, although that would take much longer.  In America, this movement was led by seminal figures like Susan B. Anthony and Elizabeth Cady Stanton, but others before them like Abigail Adams, wife of John Adams, had demanded they be recognized.  John wisely did.

As much as we would like to strip women's rights from socialism, the two go hand and hand, which is why we see fiery young Congresspersons like Alexandria Ocassio-Cortez and Ilhan Omar not backing down to the pressure they face on Capitol Hill, which still remains largely a male dominated society.  It wasn't until the election of five women senators in 1992 that the Senate even installed a women's bathroom.

Democratic women far outnumber Republican women in Congress, and have much greater representation on committees.  This was made painfully obvious during the Kavanaugh confirmation hearing, where four Democratic women sat on the panel and no Republican women, despite there being seven Republican Congresswomen.  Republicans don't like being reminded of this discrepancy and have since added Joni Ernst and Marsha Blackburn.

The odd thing is that white women still vote overwhelmingly Republican in the presidential elections.  Even Trump, despite his misogynistic past, won the white women's vote, which is all the more odd since he was running against a white woman.  It appears his misogyny caught up to him in the midterms where an historic number of women won House seats. Something even Trump took time to note in his deferred State of the Union Address.

I suppose it is because many white women don't like being viewed as feminist or socialist, preferring to see themselves as traditional and conservative.  Yet, conservative women for the most part work just like their liberal counterparts, a right that only relatively recently has been afforded them thanks to the socialist movement.  Even still, women only earn 80 cents to the dollar of man, which is also a sore point among conservative women.

It seems the biggest difference of opinion comes down to reproductive rights.  Conservative women remain staunchly anti-abortion and cast their disapproval on contraceptives, often citing the Books of Moses, whereas feminists continue to advocate choice and would like to see the widespread availability of contraceptives, particularly in high school, where teenage pregnancy is a big problem.

This came to a head in the Women's March on the Capitol in 2017 when pro-choice organizers rejected pro-life marchers despite both wanting equal pay for equal work, which was the theme of the march.  Even Hillary Clinton chimed in on this one, supporting pro-lifers right to march, much to the chagrin of leading feminists.

It is for these reasons that not all women celebrate International Women's Day, at least not in America.  For many conservative women, it is still seen as a socialist holiday, which they simply can't accept despite best efforts to turn this day into a Hallmark card holiday.

Early pagan cultures in Europe celebrated the woman and many native American cultures were matrilineal if not matriarchal in order.  Yet, with the advent of Judaism and other male-centered religions, women found themselves subordinated to man and have struggled these past 4000 years to remove themselves from the shadows of society.  This subjugation can still be found in orthodox societies around the world.

Even in so-called liberal societies, women face many barriers.  Sexism may not be so obvious but still exists and finds more subtle ways to deter women from gaining positions of greater authority.  It is changing, as we saw this last election, especially at the state level where women became the majority in a state legislature for the first time in Nevada.  Susan B. Anthony and Elizabeth Cady Stanton would be proud.  They fought for women's suffrage at the state level after having failed to convince Congress to include women in the fifteenth amendment.

In time, we will have our first woman president, maybe even in 2020, as an historic number of women vie for the position in the Democratic Party.  That will only happen when women bridge their differences and White women vote along with Black and Hispanic women for a woman who best represents their interests.

International Women's Day still carries its political stripes.  It is an opportunity to pay tribute to the women who have pushed for equal rights as well as those who made pioneering achievements over the last two centuries and even before.  Most important, it is a day to recognize the women among us who makes our world a better place, and the valuable parts they play in our lives.  Share that love and appreciation today!

Posted by James Ferguson at 4:39 PM