What's in a Trope? 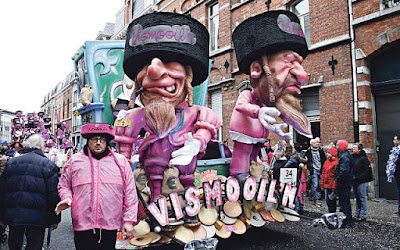 Racism is largely the product of myths and legends.  It is perpetuated through stereotypes, which is why so many persons took exception to a float in a recent Belgian parade depicting ugly Jewish caricatures, not much unlike those that were common in Europe before WWII.  These European Carnival floats garishly display a great number of caricatures, including those of Trump.  Creators claim it is all in good fun, but you have to wonder why such gross caricatures persist.

Anti-Semitism is on the rise in both Europe and the US, but it is also being used as a cudgel to stifle opposition.  We recently saw this in a tweet by Ilhan Omar, which was blown way out of proportion, forcing the Democratic-led House to pass a resolution against any form of racism or bigotry.  Many didn't think the resolution went far enough, notably Donald Trump, who called the Democrats an "anti-Israel" and "anti-Jewish" party for not publicly admonishing Omar for her alleged anti-Israel comments.  There were those who wanted her thrown out of Congress all together.

Omar may have used a trope, for which she apologized, but she was in fact questioning the huge financial support Congress gives Israel every year, while so many Palestinians suffer under Israel.  This is an issue close to her heart and the community she represents.  She is one voice.  Yet, Trump and many Republicans see this "anti-Israel" attitude infecting the whole party.  One conservative critic went so far as to call it "Corbynism," referring to British Labour Leader Jeremy Corbyn, who has been under attack recently for a number of things, not least of all anti-Semitism.

In his own way, Bret Stephens is showing just as much bigotry and contempt as he claims Omar is showing, as he picks at a couple of tweets to try to present her as a radical Leftist who insidiously pushes an anti-Israel agenda in Congress.  This is the same criticism being leveled against her by many conservative pundits, and in turn the Democratic Party in general, although Stephens doesn't go that far.

It's pretty tough to speak out against Israel these days, even as it makes life harsher and more miserable for Palestinians, particularly those in Gaza.  No one wants to be reminded of the many failed attempts to reach some kind of land agreement between Israel and Palestine that would allow them to live as two separate independent states.  The last attempt was in 2000 by Bill Clinton, a last gasp effort before the Jewish conservatives regained control of the Knesset, that failed and  Palestinian leader Arafat was held largely to blame.  Since then neither the US nor any other country has made any substantial effort to resolve the malingering crisis.

The interesting part about Stephens' opinion is that he resorts to a few tropes himself like stating that Israel is far more democratic and progressive than Palestine, specifically noting gay and women's rights.  Fact is Palestine is a democratic government authority with elected leaders, and at least on the West Bank there are no laws prohibiting homosexuality and women having equal access to government.  Like so many pundits, Stephens lumps Palestinians in with repressive countries like Saudi Arabia, when in fact the Arab world is not homogeneous in its views toward gender and sexuality.  For that matter, nor is Palestine as Gazans are much less tolerant than their West Bank cousins, which is why the two regions have split politically, making the crisis all the more thorny to deal with.

Israel is also not homogeneous in its views.  Far from it.  Bibi Netanyahu has managed to hold sway for the past decade largely through a coalition of rightwing parties to counter a fractured Labour Party that hasn't managed to regain the majority since 2000.  He was barely able to form a coalition in the wake of the last elections and may finally lose power this April when Israelis vote again, especially with corruption charges hanging over his head.

As for American Jews, many are openly critical of the situation in Israel, but it is much harder to call them anti-Semitic, although it has been done.

Despite Trump's bellicose rhetoric, 75 per cent of Jews voted for Democratic candidates in the recent midterm elections, the same percentage that voted for Democrat Hillary Clinton in 2016.  That's a rather overwhelming amount of support for a party being labeled anti-Semitic.  The reason is quite simple there are more Jews represented in the Democratic Party than there are in the Republican Party.  Last count, 16 Democratic Jews in Congress as opposed to only 2 Republican Jews, not to mention the wide disparity at the state and local level of government.

One has to be careful not to use tropes, and Ilhan Omar apologized for her reference to "Benjamins," but by condemning her and the entire Democratic Party, these critics have used tropes themselves, namely the Socialist and Leftist tropes to paint the resurgent Democrats as a pre-war band of communists.

Oddly enough, Jews were overwhelming socialist in Europe before and after the war.  Many found high-ranking positions in the Soviet Union, even the notorious Cheka, as Yuri Slezkine writes in The Jewish Century.  It wasn't until Stalin imposed his iron will that Jews found themselves out of favor with Soviet authorities, and sought emigration to the new homeland of Israel after the war.  Even still, many Jews continued to hold high-ranking positions within the USSR.  So you can be both Jewish and Socialist.  In fact, Israel itself is a socialist democracy.

This gets us back to Jeremy Corbyn, who has been accused principally of fostering a militant brand of socialism, brooking no compromise and therefore leaving poor Theresa May out on a limb when it comes to Brexit.  Much easier to blame him for the impasse than it is members of her own party, who have split with her on the soft deal she is proposing.  If she could just get her own conservatives in line she would have enough votes to pass the EU exit deal, instead she faces another historic loss.

Corbyn is an irascible cuss.  He's a far cry from the ever so amenable Tony Blair who was open to any compromise.  These anti-Semitic charges are nothing more than an attempt to break the Labour Party apart, which made substantial gains in the last elections, just as singling out Ilhan Omar's tropes is an attempt to drive a wedge in the Democratic Party before the upcoming 2020 elections.

Politics uses myths and legends to create stereotypes that are easily digestible in the media.  Hence, we see political discussion reduced to memes in social media, often far uglier than any carnival float you will find in Europe.  The myth of Israel is a favorite one for conservatives because it plays into their own legends regarding American exceptionalism.

Anti-Semitism remains, but when it is used as a cudgel to beat unruly politicians back in line you have to wonder to what degree it is being exploited for political purposes.  This is certainly the case in Britain right now, and if Trump has his way will be the case in America as well.  This guy will use any trope to get himself re-elected, as will Republican Congresspersons.