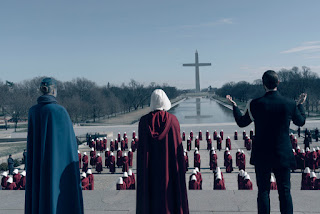 The Handmaid's Tale has been long on images and short on story ever since completing the first season.  Part of the problem is that the writers ran out of story.  Margaret Atwood only took her distopian vision of America's future so far and now the writers are having to come up with ideas of their own.  Not knowing how many seasons they can milk out of the premise of an American Taliban, they are taking their time, moving at a snail's pace, trying to expand the territory a bit without drifting too far away from the central theme.  So, we get a lot of plot twists to keep us off guard, hoping that suspense will keep viewers tuning into the Hulu series.

At its core, Atwood imagined a state where the religious conservatives staged a coup and toppled the American government.  They installed their own version of a Shining City Upon a Hill, which to this point I thought Boston was the capital.  This is where it all began nearly 400 years ago when Governor Winthrop declared the city the capital of the Massachusetts Bay colony.  But, we find out in episode 6 of season 3 that Washington is still very much the capital -- a veritable 1930s Berlin draped in red banners with the Washington monument made over into an enormous cross.

The Lincoln Memorial still stands but the great president has been destroyed, much like the Taliban destroyed the Buddhist monuments in Afghanistan.  The famous inscription has also been destroyed, as it seems the Gilead authorities have chosen not to enshrine his memory forever but rather turn the memorial into a neo-classical backdrop for all their productions.

Most religious conservatives today are fine with Washington and Lincoln, but if Gilead really wanted to make this reclaimed land in the name of its forebearers, Boston was the logical choice.  This is the religious identity Atwood put forward in her novel, and the image the series ran with for two-and-a-half seasons.

It seems the producers now want to project a far more powerful Gilead with ambitions of invading Canada over the fate of little baby Nicole, who was kidnapped and smuggled over the border by one of the handmaids.  We were led to believe that Serena, the religious mother of the child, was in on the plan, but now it seems she and Commander Fred were using the baby as bait to initiate a war with Canada.  Far from being a benevolent guard, Nick, the real father of the baby, is one of Gilead's highest honored Christian warriors.  It's all so muddy that it is hard to say for certain what is going on at this point.

Atwood treated Gilead as a work in progress, and gave it a life span not much longer than the Third Reich.  She didn't go into details, having taken the point of view of the Handmaid Offred, who would have had a very limited idea of what was going on around her.  As a result, it was a very personal tale of repression.

However, the producers of the series have decided to take on a much bigger picture, shifting the point of view to Serena, who has far more access to the broader world of Gilead.  We got hints of this in earlier episodes.  Before the coup, Serena was a well-respected writer among religious conservatives, and her book, A Woman's Place, served as a base text for the new world order that was established after the fall of Washington.

You never know quite what to think of Serena, and the writers are using this uncertainty to keep the viewer off guard.  As such, she has become a far more compelling character than June, aka Offred, aka Ofjoseph, who put all her cards on the table only to find out she had been played.  This also allows the writers to take the story in a new direction, which has been made abundantly clear in the last two episodes.

For her part, Atwood is writing her own sequel to the 1985 novel, which she previously wrote when Reagan was president.  The Gipper used the phrase, "a shining city upon a hill," in his speeches.  Many took this as a coded language to the religious right, which rose as a considerable political force in the early 80s, led by the affable Jerry Falwell, who became one of Reagan's spiritual advisers.  It will be interesting to see where Atwood takes the story in the Age of Trump.