To Mars and Beyond 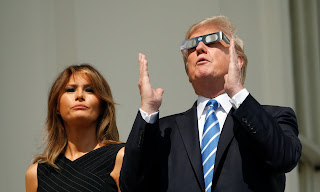 How does one deal with the Artless Dodger?  No sooner did I post a piece on his Memorial Day gaffes than he provides us with 25 startling new quotes from an interview with Laura Ingraham before a ceremony honoring D-Day at Normandy.  Then he offers up the mind-blowing quote that the moon "is part" of Mars, all but quashing the "great deal" he strong-armed Mexico into making on border security, which he apparently doesn't feel goes far enough, leaving "very profitable" new tariffs on the table.  This is all within a two-week news cycle!

Even for the Donald that is more misdirection than usual, leaving everyone dizzy with expectation as to how he outdoes himself now.  The NASA quote takes top prize.  Apparently, he was miffed that Neil Cavuto thought going to the moon was no big deal.  Like didn't we do that decades ago?  Trump can't stand being made to feel small, so he lashed out at NASA for not thinking bigger, like going to Mars.  NASA does eventually plan to go to Mars, but would like to use our moon as a base of operations. Trump appears to have conflated the two separate missions, probably meaning to skip the moon all together and go straight to Mars, like Elon Musk plans on doing by 2024.  Unfortunately, it came out like our moon is one of Mars's moons, making him look like a complete dunderhead. This is what happens when you don't review your tweets before you post them.

Moon missions aside, Trump has a far bigger problem.  Nancy seems to have unintentionally revealed her strategy for dealing with the president over the next year-and-a-half.  She prefers to leave the impeachment cloud hanging over his head, letting the charges accrue by further investigating the allegations in the Mueller Report. While Harry Enten of CNN seems to think Nancy is gauging the public mood, I think she would prefer to keep Dastardly Don on tenterhooks throughout the election and leave it up to the courts to decide his fate after his presumed defeat.

She knows impeachment will only go as far as the House.  The Senate will not approve it, and Trump will feel as though he has been totally vindicated yet again.  By leaving the charges out there, and knowing the State of New York could bring tax evasion charges against him once he is out of office, this makes the prospect of locking Trump up a real possibility.  At the very least, Trump will spend his retirement battling these charges in court.

Trump was notably upset when Nancy reportedly said she wants to see him in prison.  The irony is rich given that he used "Lock Her Up," in reference to Hillary Clinton, as a constant refrain throughout his 2016 campaign.  Of course, Trump would like us to think he didn't really mean it since he was such good friends with the Clintons before he ran for President, whereas Nancy is a "nasty, vindictive, horrible person."

I think to a large degree Trump doesn't understand all the criticism being heaped on him because for him being president is a reality show.  Whether it is threatening tariffs on Mexico, a military incursion into Venezuela or a war with Iran, these are just means of garnering television ratings.  He doesn't really plan on following through on these actions, especially if he gets what he wants like he did from Mexico.

These are just political stunts.  His administration had been trying to hammer out a border security deal with Mexico for months.  Trump, or more likely one of his advisers, saw this as an excellent opportunity to make him look tough, helping to bury some of the bad publicity he had been getting recently.  The only problem is that Trump just as quickly deflects attention away from these "victories" with his senseless tweets, largely because he can't stop himself from reacting to what he sees on Fox News.

Trump acts like he is still living in Trump Tower commenting on the Obama administration.  He revealed himself yesterday when a he petulantly tweeted that he wasn't getting enough credit for all the great things he's doing.  If he was Obama, the New York Times would be praising him to no end.

He is far removed from the actual process of his administration.  He spends at least six hours a day watching Fox News, chatting with its political pundits, and following twitter on so-called "executive time."  His minions scurry around trying to secure these great deals, stir up unrest abroad and put a budget together that reflects their draconian view of government.  Trump is simply called in to put his imprimatur to the final executive order, which by most accounts he never bothers to read.

If we are to believe Howard Stern and others close to him, Trump never wanted to be President.  The campaign was a great marketing opportunity for him, nothing more.  Who knew people would actually vote for him?  It's like the guy who runs for Homecoming Queen and wins.  Now, he has to don a dress and pretend to be a queen.

It's obvious Trump has assiduously tried to avoid all responsibility, especially when things go bad. He spends much of his time at one of his resorts playing golf, ringing up a monthly tab that outstrips that which the Obamas spent in a year on vacation.  Remember the conservative outrage over the Obama family trips to Hawaii and Martha's Vineyard?  None of these political pundits bat an eyelash over Trump's enumerable golf trips, even though he explicitly said on the campaign trail he would have no time to play golf.

Trump has literally lied his ass off from day one, yet the conservative media refuses to hold him accountable.  Instead, it laments that no president has been subject to the same scrutiny that their president has by the mainstream media, conveniently forgetting all the criticism conservative pundits heaped on the previous president for eight long years.  Trump and Fox pundits never let the birther campaign go throughout Obama's tenure, refusing to concede how hurtful it was to him and his family.

This is what you get when you elect a clown.  The sad part is that the mainstream media goes along for the ride because of the ratings Trump's follies generate.  We continually look aghast by the absurd things he says and does as if somehow this can't be real.  There most be some other channel where Hillary is President and Britain didn't fall for Brexit and the world is going on as it normally would.  We just can't bring ourselves to break away from the Trump channel because it is so damn entertaining.

Posted by James Ferguson at 1:10 PM