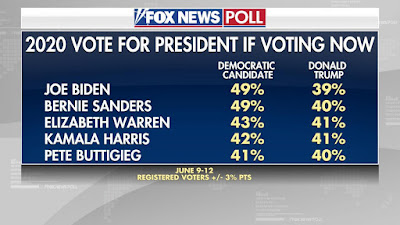 This is not just bad news for the president but also for his top rival Joe Biden, who until now had been billed as the only Democratic candidate capable of beating Trump.  Internal polls in the Trump campaign also revealed him trailing Biden in key states like Pennsylvania and Wisconsin, which he won in 2016.  Trump was furious and had the pollsters dismissed.

If there is any consolation, Trump started the 2016 campaign well behind Hillary Clinton, as were all the Republican candidates at the time, yet emerged the victor.  The only problem now is that he has a record and can no longer rhetorically ask, "what have you got to lose?"

As it turns out, a lot, which is why you see so many Democratic candidates running for office this time around, with most of them qualifying for the first round of debates later this month, even latecomers like Bill de Blasio and John Hickenlooper.

They were all made to feel they were running for no. 2 on the ticket, as Biden polled so far ahead of any of them.  However, these latest head-to-head polls vs. Trump have emboldened them, as Biden can no longer project himself as the only Democrat capable of challenging the President.  Biden was recently called out on his previous abortion stance, which he has since reversed, as well as his watered-down versions of the Green New Deal and other progressive measures very popular among Democrats.  His support of the Iraq War, Patriot Act and other unpopular legislation will no doubt be called into question at the first debates.

Joe Biden is a political dinosaur using his charm and so-called centrist views to win over Democrats in early polls.  Mostly, he has strong name recognition.  It is taking time for Americans to learn about the other candidates, but as they do, Biden's support begins to erode.  He also benefits from progressives being torn between several candidates, whereas he overshadows the other centrists seeking the nomination.  No one really knows or cares about John Hickenlooper, Amy Klobuchar, Tim Ryan or John Delaney, to name a few.

By contrast, Bernie has to split the progressive stage with Liz Warren, Mayor Pete, Kamala Harris and Beto O'Rourke, although it appears Beto's star power has gone into supernova.  Liz actually leads Bernie in some polls, and appears to have the early support of AOC, who plays an interesting shadow figure in this campaign.  Alexandria Ocasio-Cortez not only sides with Liz on a broad range of issues, but also the controversial ending of Game of Thrones.

Liz is not much younger than Bernie and Joe but decidedly more hip and better able to connect with younger voters, largely because she is not afraid to address their issues.  Mayor Pete at 37 would seem like the logical representative for Millennials, but to this point has been rather vague as to where he stands on key issues.  The younger generation wants its voice heard, and so far Liz has been the only Democratic candidate brave enough to do so.  Most notably, she wants to cancel outstanding student loan debts, a huge albatross around most young persons' necks, and would benefit a great number of parents who cover those loans.

It should be a very interesting summer as these candidates jockey for position in the ever-shifting polls.  The first Democratic debates, scheduled for June 26 and 27, will give us the first real test of their viability.  If nothing else, it will give Trump more persons to snipe at on twitter.