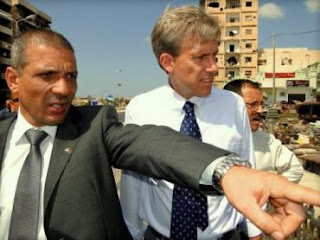 It seems the October Surprise came early this year with the attacks on embassies in Egypt and Libya.  The attack on the consulate in Benghazi has proven particularly deadly with 4 confirmed American deaths, including that of Ambassador Christopher Stevens (pictured above), whose fleeing car was struck by a rocket bomb.  No doubt this will test the Obama administration in the following weeks, as similar "surprises" have previous Presidents in the last month of their terms.

Wikipedia dates the October Surprise back to 1972 and Kissinger's statement, "Peace is at hand," in reference to the Vietnam War, but it only served to enhance Nixon's lead in the polls.  President Carter was in the final stages of negotiating a Iran hostage release before the 1980 election, but it seems events conspired against him.  Gary Sick broke a story to the New York Times that the Reagan campaign had negotiated a secret deal with the Iranian government to delay the release, which occurred less than an hour after Reagan's inauguration.

In this case, a movie, Innocence of Muslims, outraged protesters.  It was released earlier this year, with the notorious Terry Jones' backing, but only recently translated into Arabic and made available on Youtube after failing to generate any interest at movie theaters.  It was picked up by an Egyptian television channel over the weekend.  The Israeli-born filmmaker, Sam Bacile, is a notorious anti-Muslim, who now hides from scrutiny.  Apparently, an embassy official at the Egyptian embassy in Cairo apologized for the film, which Mitt Romney was quick to seize upon and make into an issue.  Of course, it doesn't take much to set off Islamic fundamentalists, but this seemed a particularly well-timed incident.
Posted by James Ferguson at 4:32 PM