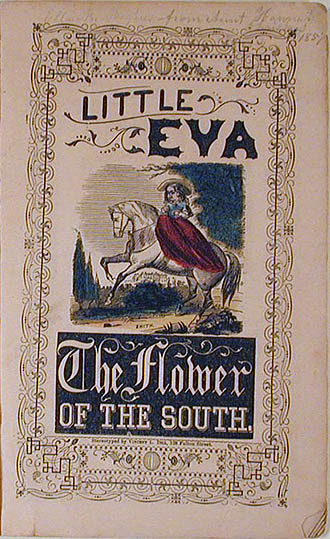 The two most famous anti-Tom books are The Sword and the Distaff by William Gilmore Simms and The Planter's Northern Bride by Caroline Lee Hentz.

Simms' The Sword and the Distaff came out only a few months after Stowe's novel and contains a number of sections and discussions that clearly debate Stowe's book and view of slavery. The novel focuses on the Revolutionary War and its aftermath through the lives of Captain Porgy and one of his slaves. Simms novel was popular enough that it was reprinted in 1854 under the title Woodcraft.

The Planter's Northern Bride by Caroline Lee Hentz was published two years after Uncle Tom's Cabin. Hentz's novel offers a defense of slavery as seen through the eyes of a northern woman — the daughter of an abolitionist, no less — who marries a southern slave owner. As with other books in the genre, Hentz's novel tries to show that black people lacked the ability to function well without oversight by whites. Her novel also focused on the fear of a slave rebellion, especially if abolitionists didn't stop stirring up trouble.

Simms and Hentz's books were two of between twenty or thirty pro-slavery novels written in the decade after Uncle Tom's Cabin. Other well-known authors who published anti-Tom novels include John Pendleton Kennedy.

Mary Henderson Eastman's Aunt Phillis's Cabin was one of the bestselling novels of the genre. Published in 1852, it sold 20,000 to 30,000 copies. In a note in the book, Eastman proudly stated she was a descendant of the First Families of Virginia.

Little Eva: The Flower of the South, by Philip J. Cozans, was a rare example of anti-Tom literature, in the sense that - whereas most anti-Tom novels were written for an adult audience - Little Eva was in fact an anti-Tom children's novel.
_______________________

Not surprisingly, Cozans seems to have taken his title from one of the characters in Uncle Tom's Cabin, Eva St. Clare, also known as "Little Eva," while Eastman plays on the title of the famous novel. It also seems that Hentz took her idea from one of Stowe's character, Ophelia St. Clare, a Vermont Quaker, who travels South to help her nephew at his Louisiana plantation.
Posted by James Ferguson at 11:12 AM