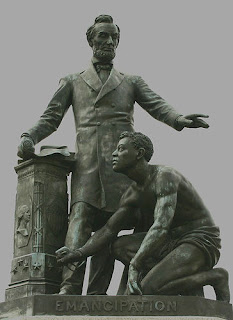 I started to put this in the Reading Group section, but wanted to include this photo.

"He was preeminently the white man’s President, entirely devoted to the welfare of white men. He was ready and willing at any time during the first years of his administration to deny, postpone, and sacrifice the rights of humanity in the colored people to promote the welfare of the white people of this country.

In all his education and feeling he was an American of the Americans. He came into the Presidential chair upon one principle alone, namely, opposition to the extension of slavery. His arguments in furtherance of this policy had their motive and mainspring in his patriotic devotion to the interests of his own race. To protect, defend, and perpetuate slavery in the states where it existed Abraham Lincoln was not less ready than any other President to draw the sword of the nation. He was ready to execute all the supposed guarantees of the United States Constitution in favor of the slave system anywhere inside the slave states.

He was willing to pursue, recapture, and send back the fugitive slave to his master, and to suppress a slave rising for liberty, though his guilty master were already in arms against the Government. The race to which we belong were not the special objects of his consideration. Knowing this, I concede to you, my white fellow-citizens, a pre-eminence in this worship at once full and supreme. First, midst, and last, you and yours were the objects of his deepest affection and his most earnest solicitude. You are the children of Abraham Lincoln. We are at best only his step-children; children by adoption, children by forces of circumstances and necessity....

Viewed from the genuine abolition ground, Mr. Lincoln seemed tardy, cold, dull, and indifferent; but measuring him by the sentiment of his country, a sentiment he was bound as a statesman to consult, he was swift, zealous, radical, and determined."

I agree with Douglass that Lincoln sort of ruled from that weird middle ground. I think this is a great speech: