The Warrior and the Priest 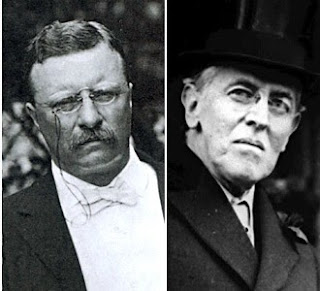 As primer or possible alternative there is John Milton Cooper's much shorter The Warrior and the Priest.  This appears to be the full text.  Cooper compared and contrasted the approaches of  Roosevelt and Wilson, which he regarded as the forefathers of modern politics.  Not since Jefferson and Hamilton, he noted in his Preface, had there been such a vociferous debate over the direction of the country and the character of the nation.  Far from backing down, Wilson held his ground, as sure in his "rightness" as Roosevelt was in his.

The first part deals with their political paths, humorously entitled "The Dude and the Professor."  Cooper noted that Roosevelt consciously re-invented himself in personally heroic terms, while Wilson also overcame adversities but in a more quiet, unassuming way.  Apparently, Wilson suffered from dyslexia, which is why he was so late in enjoying books.  Whereas Roosevelt devoured books with the same gusto as he did his meals, Wilson preferred to savor his reading material, often reading the same books over again.
Posted by James Ferguson at 1:18 PM