How Much is Too Much Debt? 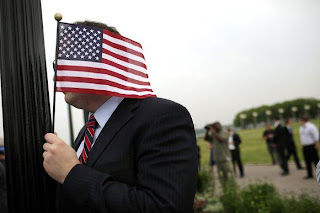 Standard and Poor's recent decision to downgrade the US credit rating is a historic one.  The US had enjoyed a AAA rating since 1917, which not only spans the Great Depression, but the Big Recession of the 70s as well, not to mention the collapse of the S&L's in the 80s and the banking meltdown of 2008.  So why now?

S&P would like the public to believe it is non-partisan, but it seems it was first challenging the White House back in April, according to this article from Business Insider, which very clearly shows which side of the political divide S&P sits on,

The S&P was much less optimistic when they reported that  "we believe the Democratic Party, which controls the Senate, remains committed to its spending priorities and is unlikely to agree to further tax cuts, particularly for the highest-income earners, meaning Democrats are unlikely to accept the Ryan proposal without substantial modification."

Seems the $4 trillion deficit reduction plan Obama had on the table in June, which only included 17% in revenue increases, wasn't enough in their mind.  But, like the Ryan plan, S&Ps numbers just don't add up, as Tim Geithner pointed out.
Moody's thinks there should be more budget cuts as well, but it chose to retain the US's AAA rating.  Interesting that neither of these credit rating agencies feel that revenue increases are in order?
Posted by James Ferguson at 11:40 AM