The War on Social Security 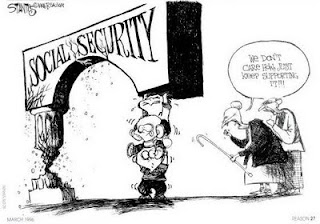 Marco Rubio's recent comments make it abundantly clear the right wing hasn't given up its war on Social Security.  You can view more political cartoons in the same vein as the one above.   Once again, we hear all the horror stories, claiming that early retirement will run out by 2017 and that Social Security itself could be insolvent by 2035, assuming we don't dig ourselves out of this economic hole.  It was the same type of rhetoric that was used during the early Reagan years, as he badly wanted to tap into entitlement programs.

As it is, we have seen an erosion in entitlement programs over the last 10 years with Congress running up record deficits while trying to maintain historic low taxes.  The tax base, as a percentage of GDP, is the lowest it has been since 1942.  Yet, every Republican presidential candidate is calling for even lower taxes, while Rick Perry wants to abolish the federal income tax all together, with the repeal of the 16th amendment.  Where will that leave entitlement programs?

There seems to be this widespread feeling among a restless young generation that senior citizens are riding on their backs, and that only by freeing up Social Security and Medicare in the form of vouchers, can they be free to choose what they want to do with "their" money.  Bush first broached the idea of Social Security vouchers in 2003, and retracted his statement pretty quickly when he saw the angry reaction.  Nevertheless, Paul Ryan suggested the same thing for Medicare in the budget plan he proposed earlier this year.  Rubio seems to represent this disgruntled generation.
Posted by James Ferguson at 9:45 AM