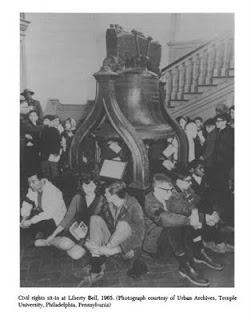 Once again we find ourselves in a battle over "who owns history?"  Republican presidential candidates have been making some rather sensational interpretations of American history, and the Tea Party would like to claim its roots in the original Tea Party revolt of the 1773.  Sarah Palin's recent tour of the Northeast defied all credulity when she repeatedly confused historic facts, as she tried to blend American history into her own personal narrative.

We've all read how SC justices Scalia and Thomas have inventively reinterpreted the Constitution, including the 14th amendment to favor corporate interests, and in Scalia's case demean women's rights.  The "original intent" debate seems to be the cornerstone of the right-wing "think tanks," with conservative writers re-interpreting the Constitution and its Congressional debates to suit their own interests.

As Eric Foner notes in his collection of essays, this intellectual posturing has deep roots.  He focuses on the "Redeemers" in one essay, who succeeded in repealing the hard fought post-Civil War Reconstruction, and how contemporary Republicans would like to see Civil Rights legislation similarly repealed, focusing largely on the affirmative action legislation which followed.

Rick Santorum, who was born in 1964, is on record as saying he "hates" the 1964 Civil Rights Bill and the Medicare bill which followed, preferring instead a pre-1964 America. I wonder if he would prefer an America without him?  Seems Goldwater is more the "godfather" of the current crop of Republicans than Reagan, who similar lashed out against Civil Rights legislation.
Posted by James Ferguson at 1:14 PM