Hyde Park on the Hudson 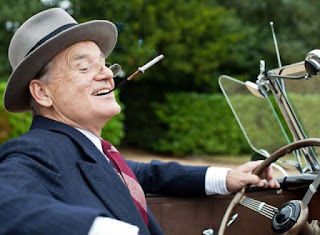 On a lighter note, Mother Jones hails Bill Murray as "far and away the best Franklin D. Roosevelt in movie history."  Here's the trailer.

Seems FDR has drawn cinematic attention as of late, including this oddball movie with Barry Bostwick as the "American Badass!"  Jon Voight played the President in Pearl Harbor.  John Lithgow played him in 1994 movie, When Lions Roared.  Ralph Bellamy assumed his character in the television mini-series War and Remembrance and in the 1960 movie, Sunrise at Campobello.  Edward Hermann also played FDR twice in television movies from the late 70s.  He was even portrayed by Nikolai Cherkasov in a 1949 Soviet film, The Victors and the Vanquished (11:40 min. mark). The earliest known portrayal is by Al Richardson in a 1937 Three Stooges' movie, Cash and Carry.
Posted by James Ferguson at 12:00 PM