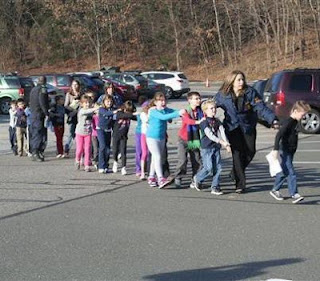 The nation took pause yesterday in memory of perhaps the worst civilian gun-related tragedy in American history.  There have been 31 school shootings since Columbine in 1999.  Yet, local and state governments find it ever more difficult to pass gun laws in the wake of the Supreme Court decision that shot down a DC gun ban in 2009.  We hear over and over again that "guns don't kill people, people kill people."  Well, having easy access to assault weapons sure makes killing people a lot easier, especially six and seven year olds.  One can only hope that a horrible incident like this will call attention to the runaway "gun culture" that has developed in America, and has affected middle-class kids like Adam Lanza.