Of Blue-blooded Kings and Redcoats 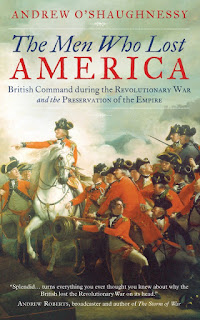 We all know the Revolutionary War as told by the victors, but here is an account that pieces together the stories told by the losers.  It is often depicted as one of the those events where the British snapped defeat from the jaws of victory.  Andrew Jackson O'Shaughnessy takes the British point of view in The Men Who Lost America, focusing on a number of factors that ultimately led to them losing the colonies.   We get the viewpoints of King George III, Prime Ministrer Lord North and military leaders like General Burgoyne, who led one successful military campaign after another, only to find distant factors result in a lack of British resolve against the upstart colonists.  But, in the end O'Shaughnessy, a fellow of the Royal Historical Society, seems to give a greater amount of the credit to the colonists themselves than many historians, especially British historians, had been willing to concede.  Here's a review from the Examiner.