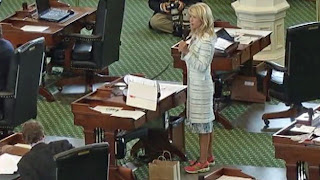 In one of the more epic filibusters, Wendy Davis stood and delivered for 13 hours a filibuster that staved off a draconian anti-abortion bill in Texas.  This stopped the Senate from ram-rodding a bill pushed by Rick Perry, as the 30-day special legislative session expired at midnight and Ms. Davis was still standing in her now famous pink Mizuno tennis shoes.  These are one of the preferred shoes of marathon runners, and Ms. Davis stood for what would essentially be 3 marathons for most runners to stave off this measure.

She got help from some of her female colleagues, notably Leticia Van de Putte, who stood down a last minute effort by Republicans to force a vote over Wendy's filibuster.  Unlike other filibusters we have seen recently, this one had consequences, as this anti-abortion measure has been adopted in neighboring Oklahoma and Arkansas as well as other Southern and Plains states.  Hopefully, this incredible stand will call attention to the nation-wide effort of conservative groups to greatly limit a women's right to her own body.