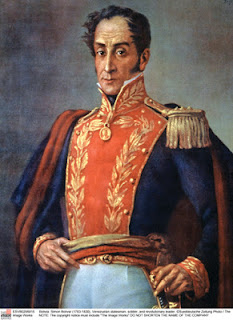 Sadly, we have not dealt much with history South of the Border, but we could rectify that with this new book on Simon Bolivar, the first great liberator of Latin America, launching an independence bid that led to the formation of Gran Columbia, rivaling the fledgling United States.  Bolivar has long figured heavily into Latin American history and fiction.  I remember reading Gabriel Garcia Marquez's The General and His Labyrinth, which was based directly on Bolivar, and Autumn of the Patriarch, which more loosely explores a similar theme.

Here is Marie Arana, a novelist and journalist taking her stab at the Generalissimo in a new book that attempts to put the man within the context of his time.  It seems she weaves in a lot of intrigue, notably attempts by the US to undermine his authority, as many felt (including those in Gran Columbia) that Bolivar was just another Napoleon.  But, Arana seems to focus on his liberal ideals with perhaps a bit too much veneration to read the NY Times review.

There is no question of Bolivar's importance in Latin America, which is why so many leaders have attempted to assume his mantle, most recently Hugo Chavez.
Posted by James Ferguson at 9:14 AM