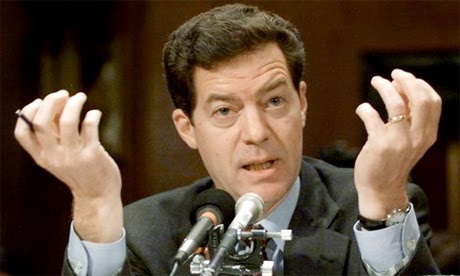 Probably the most repellent of the Republican governors elected in 2010 is Sam Brownback.  He rode the Tea Party wagon into Topeka and has literally split the state in two with his divisive policies that have even led to Republican defections, which Jessica Williams has fun skewering in this segment, The Kansas Experiment.

Brownback combines supply-side economics with religious social conservatism in a way only a teabagger could do, and not surprisingly remains a darling in the TP, despite widespread dissatisfaction with the economic experiment he undertook two years ago by slashing taxes in an effort to attract new businesses and encourage existing Kansas businesses to hire more employees.  The result has been a resounding failure.

Of course, none of us should be surprised.  Businesses typically pocket their tax cuts unless there is an impelling reason for them to take on new employees.  Brownback offered none.  Again, no surprise, because I doubt old Sam expected them to.

The large revenue shortfall has resulted in major domestic cuts in health, education and welfare, while the state government continues to operate in the red.  This is a pattern that has repeated itself in many other states, namely Wisconsin and Florida, where 2010 elected Republican governors tried the same formula and failed as well.  In unison, these douchebags all blame the federal government, notably the 2012 fiscal cliff deal Republicans engineered in Congress, for their woes.  But, of course it is Obama who becomes the target in the campaign ads that endlessly stream on television and the Internet.

Amazingly, Brownback finds himself in a dead heat with his Democratic challenger, Paul Davis, both polling about 45 per cent of the vote.  Brownback still has the religious social conservatives on his side who seem to believe that Jesus trumps economics.  For a short while there, it seemed Davis was going to blow this race wide open, but then the attack ads kicked in, including this one linking Davis to strip clubs 16 years ago.  Oh no, we can't have that in Kansas!  Once again this shows just how effective Republicans are at making everything into a moral issue, except of course their own moral conduct.  It's enough to make a preacher lay his Bible down.

Brownback has a horrible record.  Walker barely survived a 2012 recall in Wisconsin and Rick Scott is more concerned about fans than he is debating Charlie Crist on the issues.  Yet, all three remain neck and neck with their opponents in these gubernatorial races, and I imagine at least one of them will withstand his challenger.   It doesn't seem to matter what your record is these days, your party's rank and file will stand behind you come hell or high water for the other guy has to be worse.

This kind of cynicism is so deep in our political body now that it seems impossible to root it out anytime soon.  However, we have to get past this ridiculous notion that tax cuts and austerity measures are the answer to all our economic woes.  The guys peddling these policies, like Art Laffer, have been widely discredited, yet here they are still promoting these failed ideas 30 years later.  The Laffer Center would be better served as a Clown Academy.  The only persons these tax cuts benefit are the rich.

States which have raised taxes and pushed for increases in minimum wage have (gasp!) shown improvement in their economies, especially as they pump more money into their respective economies through domestic programs.  This is something these supply-side conservatives are unable to come to terms with.  They give all sorts of evil names like "shakedown socialism," where the government is coming at you with a pitchfork and demanding your hard earned money for their own personal largesse.  Fact is this redistribution of money is the only method we have of ensuring basic social services like health, education and welfare.

It's not like these businesses don't benefit either.  After all, they draw their employees from state-supported secondary schools and colleges, and take advantage of a number of other government programs and subsidies as well.  Many businesses draw a lot of their money through public contracts on everything from new roads to new municipal and state buildings to distributing welfare checks.

In the old days, state programs were a great cash cow, and kept states going through hard times.  Not anymore.  If guys like Brownback, Walker and Scott have their way, many of these domestic programs would be slashed forever and persons would be left to scrap it out in a new privatized society where you pay directly for everything, often at much greater cost.

As it is, we have some strange hybrid form of social services that is increasingly hard to pin down, as cities lease services like parking meters to private contractors to make up for revenue shortfall but then find themselves paying exorbitant rates if they want to have free days for city events. They also often underestimate the actual revenue of these services in these long term leases, content to have large lump sums up front to meet immediate budget needs.

Posted by James Ferguson at 3:07 PM