The End of the Democratic Party as We Know It, Part II 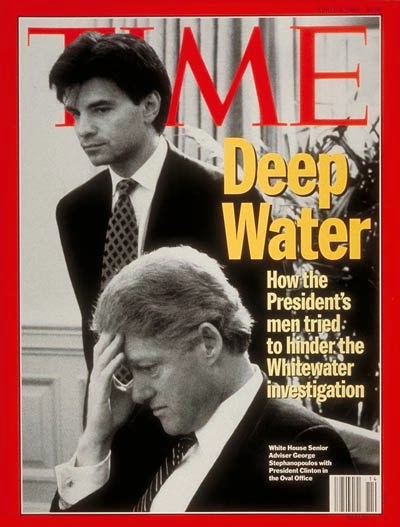 By 1994, the party was over.  Facing an unprecedented defeat in Congress, Clinton also found himself mired in a real estate investment scandal known as Whitewater.  Republicans had scored a monumental turnover in Congress, gaining control of both chambers for the first time in 40 years.  George W. Bush had also scored a surprise victory over the popular Ann Richards in Texas.  Republicans had big wins in other traditionally Democratic states as well.  At the time it seemed like a repudiation of the Clinton administration, but in retrospect it was more likely the final stage of the Reagan Revolution, which saw many Dixiecrats turn Republican and take over the South and many of the Midwest states.

The election of Reagan in 1980 had accelerated the shift of Southern Democrats to the Republican Party that had started in 1964 with the passage of the Civil Rights Bill.   Lyndon Johnson had foresaw this shift, but for him it was more important to pass the landmark legislation than it was to keep offering up weak compromise solutions to assuage the conservative wing of the Democratic Party.  Of course, he had Liberal Democrats pressing him to carry through on the Civil Rights legislation first presented before JFK's death.  Strom Thurmond, an ardent opponent of desegregation, was one of the first Democrats to turn Republican in 1964 and now served as Senate President Pro Temp.

The liberal wing of the Democratic Party seemed muted.  It had thrown its support behind Clinton, thinking they had a winner, but that feel-good vibration was gone.  Clinton seemed powerless in the wake of the electoral landslide in Congress.  Newt Gingrich, the new House Speaker, no longer considered Clinton relevant.  He felt the Republicans had secured a mandate to lead the country with their "Contract with America." 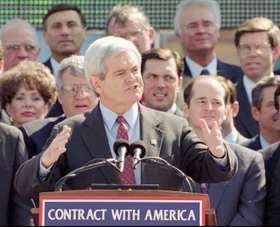 Gingrich underestimated the slippery Bill Clinton.  This was a guy who was perfectly comfortable with weak compromise solutions as long as he got the credit for them.  In the following years, Clinton would make the Contract with America his own, coming up with his own crime bill, engineering his own balanced budget, pushing through a welfare bill that echoed "The Personal Responsibility Act" that the Republicans had demanded in their "Contract," and even signing off on the Defense of Marriage bill, that allowed federal courts to annul same-sex marriages granted under laws of other states.  It seemed as if Clinton had switched parties too!

Many thought Clinton wouldn't survive another election, but the Republicans were torn between the new firebrands leading the party and the old guard that represented the former stability.  Ross Perot was still hanging around, creating the Reform Party, a forerunner to today's Tea Party.  Clinton won easily over doddering Bob Dole, gaining almost 50 per cent of the vote, losing Georgia but picking up Florida, which had barely eluded him in the previous election.

Clinton tried to evoke the same feel-good spirit as in '92, but it wasn't there.  He didn't face any challenge in the primaries, but about 10 million fewer persons voted in 1996.  What votes he did gain seemed to be from the independents that had previously voted for Perot.  As far as many were concerned, it was politics as usual.  Clinton didn't carry any coat tails with him.  Congress was still Republican, which meant more compromise bills.

Oddly enough, the Republicans didn't seem eager to work with Bill Clinton.  Gingrich and the new vanguard wanted a complete and total victory.  With Bill still hanging around, it meant they had to step back from some of their more outrageous legislation as they didn't have the votes to override a veto.  Still, Gingrich presented himself as if he ran the show, and Clinton was just an annoyance he had to deal with. 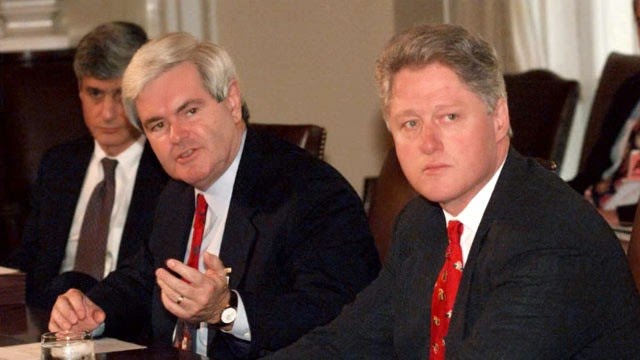 The two made for interesting adversaries.  They could have been brothers separated at birth, as they had pretty much the same biographies, having risen from relative obscurity to Washington power players in short time.   Unfortunately for Newt, Bill had inherited the charm and this is what carried him past Gingrich in the fierce political battles that ensued.  Even when the world seemed to fall in on Bill Clinton with the Monica Lewinsky scandal, he still had enough support among the people and fellow Democrats in the Senate to survive an impeachment, led by Gingrich.  The House Speaker wasn't so lucky.  The failed coup attempt ruined him, and he was voted out of Congress by his own constituency in Georgia.

You get a pretty good idea where the material for "House of Cards" comes from.  Two good ol' Southern boys battling to be King of the Hill.  This was what Clinton was good at, not much else.  He had failed repeatedly to get any meaningful legislation through Congress.  He had gone back on most of the promises he made in the 1992 campaign, most overtly in the support he gave the Defense of Marriage Act, which was finally overturned last year.  He undercut welfare programs without offering anything in return.  He signed a Draconian crime bill with a federal death penalty, without addressing any of the serious concerns in the United States penal system, notably the disproportionate number of black inmates.  Despite Al Gore's environmental conviction, no meaningful environmental legislation was passed.  Eight lost years, as far as Democrats were concerned.

Still, as a Democrat, you hoped that Al Gore would win the election in 2000, because the alternative was bleak.  Democrats appeared to have momentum.  They were poised to take back the Senate.  There wasn't much enthusiasm for Gore's challenger, George W. Bush, but as it turned out Dubya had an ace in the hole, a brother serving as governor of Florida, who would decide the razor thin results coming in from the Sunshine State by stopping a recount and declaring Dubya the winner in one of the most contentious elections in American history.

The ever so thin silver lining was the Democrats had won the Senate, which appeared would block the Republicans from carrying out their agenda.  One of those new senators was Hillary Clinton, representing New York, thanks to the purchase of a home in Chappaqua, New York, in 1999.
Posted by James Ferguson at 8:23 AM