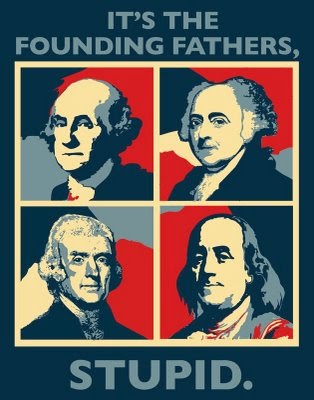 History is a funny thing.  As I noted earlier, the new Advanced Placement (AP) curriculum for American history has come under fire from the right wing for purportedly not focusing on the basics, i.e. the "Founding Fathers," or more specifically the religious conservative interpretation of these seminal political figures.

Ben Carson is the latest conservative presidential wannabe to rail against the new curriculum, claiming it will cause high school students "to go sign up for ISIS."   Sadly, I've come to expect such hyperbole from the religious right wing, which seems to think the country is on the eve of a zombie apocalypse and the only way to right the country is to ground ourselves in the basics of the Bible, which they seem to think the Founding Fathers based the Constitution upon.

Now one can understand such hacks as Sean Hannity attacking the curriculum on such grounds, but Ben Carson is a well respected neurosurgeon, so you would think he has a little better educational grounding than the average Fox News pundit.  However, Dr. Ben also appears to have missed the point of the new curriculum, which is to open up new topics for teachers to explore in class, as it was assumed by the AP committee that high school teachers would be covering the basics in American history.

The AP curriculum has become a touchstone issue in this election, as conservatives see the topic as a way to mobilize the base of the GOP in what is proving to be a rather tough set of midterms with the US Senate up for grabs.  One recently reconstituted Colorado school district even went so far as to "review" the curriculum amid the outcry, resulting in a protest by teachers and students alike, indicating that this strategy may backfire and mobilize the Left.

At heart is that the curriculum comes across as a historical "downer" with emphasis on antebellum slavery and Japanese internment camps during WWII and other American horror stories that conservatives want so desperately to put behind them, as if it was all part of some distant past (we won't call it history) no longer worth exploring.  After all, we went through the Civil Rights Movement.  Enough already!  What we need is positive history, one that extols American values and shines a light on all the good America has done in the past 200 some odd years.  History as Walt Disney would tell it, with Morgan Freeman as narrator.

As Bing Crosby and the Andrew Sisters would sing, we "got to accentuate the positive, eliminate the negative, latch on to the affirmative, but don't mess with Mr. In-Between!"
Posted by James Ferguson at 9:05 PM