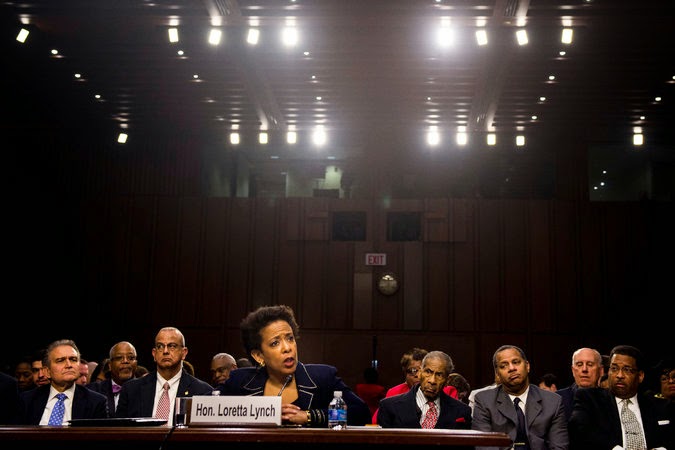 The long ugly battle over the confirmation of Loretta Lynch as US Attorney General has finally drawn to a close with 10 Republicans crossing over in support of Lynch.  Surprisingly, Mitch McConnell himself voted for her confirmation.  Yet, 43 Republican senators stood pat, and one chose to skip the vote for a private fund raiser in Texas.

Of course, Ted Cruz was quick to vent his disgust with the confirmation.  I'm sure this appealed to those gathered at his event in Dallas, but if he wants to win over the nation in his bid for president he better take a few tips from those Republicans who voted for her confirmation, like Lindsey Graham of South Carolina.  However, Graham was the only Republican senator with presidential ambitions to vote for Lynch.  Rand Paul and Marco Rubio also voted against her, althoug they weren't so outspoken as Cruz.

While Republicans have gone out of their way to disclaim racial motivations, the sticking point was her support of President Obama's executive orders on immigration, which is a highly racially charged issue.  Jeff Sessions, head of the Judiciary committee, stated bluntly, "we do not have to confirm someone to the highest law enforcement position in America if that someone is publicly committed to denigrating Congress."  Where that came from is anyone's guess, as all she did was state her opinion that the President's actions were legal and within the limits set by the Constitution.

It was probably her tone more than anything else that upset Republican Congressmen, as she didn't bow to their questioning.   Loretta Lynch has always been a woman who stands tall, with a proud father who has supported her every step of the way.

Sessions has a history of bucking Obama nominations, notably Sonia Sotomayor.  It didn't seem to matter that Lynch (or Sotomayor before) was held in high regard by her peers.  The Republicans made this into another proxy fight against Obama over immigration, delaying her confirmation vote over an anti-human trafficking bill that they seemed to purposely drag out as long as possible.  Cruz missed that vote as well.

In the end, it was the specter of Eric Holder hanging around two more years that seemed to spur Republicans to finally vote on Lynch.  Holder had said he wouldn't step down until his replacement was confirmed, and we all know how much Republican senators loath Holder.  Rob Portman, a Republican senator for Ohio, made it quite clear that was his reason for voting for Lynch.

The Republicans probably decided among themselves who would cross over to get this frustrating piece of business out of the way so that they could find new ways to challenge the President.  However, few thought so many GOP senators would cross over, as all Loretta Lynch needed was a simple majority.  At least three Blue State Republicans up for re-election voted for Lynch, including Senator Kelly Ayotte, who was the most effusive in her support of Lynch.
Posted by James Ferguson at 9:35 AM