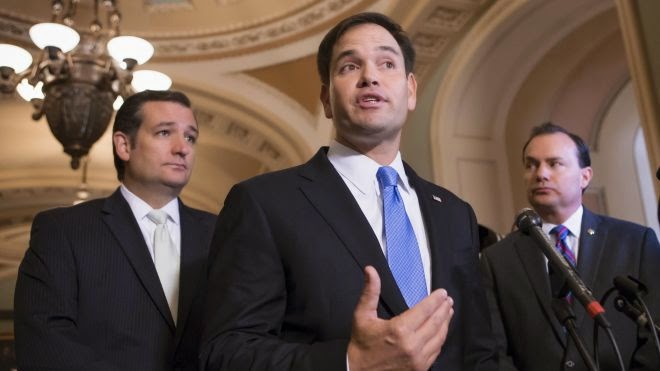 The entrance of Marco Rubio into the GOP race presents a bit of a problem for Ted Cruz, as both are hoping to appeal to Hispanic American voters, not that it matters in the Republican primaries as there are so few registered Republican Hispanics.  The percentage of "non-white" voters among the GOP electorate is only 11 per cent. but I guess they are appealing to those who consider themselves "white of Hispanic origin."

Unfortunately, the two seem to be on the wrong side of most issues that concern Hispanic voters.  Rubio did support immigration reform at one point, but has since backed away from it.  Both have come out sharply opposed to lifting sanctions on Cuba, still appealing to old-guard Cuban-Americans who represent an increasingly smaller percentage of the Hispanic electorate.  However, Cruz and Rubio are hoping to appeal to the social conservatism among a large percentage of Hispanics.   George W. Bush was able to get a whopping 44% of the Hispanic vote in the 2004 general election.

Rubio stands a much better chance than Cruz in this regard, as Ted is so far out in right field on most issues that he will have a hard time identifying himself beyond a very narrow base of Republican voters.  Marco may have come from similar Tea Party roots, but has tried to present himself as a moderate in Congress, joining forces with Republicans who passed the Senate immigration reform bill in 2013.  This was at a time when Republicans felt the need to court Hispanic voters after the 2012 debacle.

The GOP stormed back in 2014 and seems to think it doesn't have to invest as much energy in the Hispanic vote as it once did.  States have since passed voter ID laws, clamped down on early voting, and in general made it much more difficult for many persons to vote.  By shrinking the playing field, the GOP figures it can win the presidential election by sticking to its set of core values, despite these religious conservative values being highly unpopular in national polls.  After all, this is a state-by-state election with he who has the most electoral votes declared the winner.  Just ask George W. Bush. 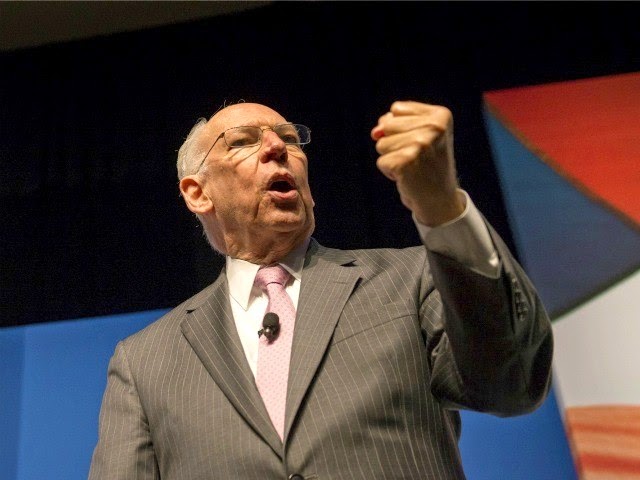 So, who are these guys anyway?  Both Cruz and Rubio have Cuban roots.  Cruz has done the most to distance himself from those roots, although his father Rafael is a very active evangelical minister who says some of the darnedest things.  Papa is often right there by his side at public appearances, and Ted has repeatedly said how much his father means to him.  Kind words, but when you take into account the dangerous level of rhetoric Rafael has spouted, much to the delight of Teabaggers, you might want to keep your distance.  Rafael Cruz makes Jeremy Wright look tame by comparison, and we all remember how much trouble Wright caused Obama in 2008.

Marco Rubio has a bit of a parent trap himself, but nothing on the scale of Cruz.  Marco's father, Oriales, is no longer around.  Marco paid eulogy to his father in his autobiography, noting that he fled Castro's Cuba and came to America to seek freedom.  The only problem is that his father came to the United States in 1956, three years before Castro took control of the island nation.  A small matter perhaps, but then we saw how the Republicans grilled Obama on his family history, repeatedly claiming that Barack lied about his true paternal birthright, yadda yadda yadda.   Still, Marco's father presents far less problems than does Ted's father.

The big question is can either of these two Hispanic candidates convince a vastly white Republican electorate that he is the one to represent his party in the general election?  They've done well in Texas and Florida, but how will they fair in the early primaries, where they don't have a home base to draw upon?

Cruz probably fairs a little better here because he has suited his bellicose words to the White Bread electorate that dominates so many Republican states.  He has kept on message, at least as far as Teabaggers are concerned, and that should serve him well on the campaign trail.   Marco will have a lot of explaining to do on immigration, which the Republican electorate for the most part wants to see made tougher, not more lenient.

Ted is a natural.  He doesn't have to pause for a bottle of water before getting the right words out of his mouth.  Marco thinks too much about issues, trying to look at them from both sides.  He actually said he needed to review the nuclear agreement being offered Iran rather than dismissing it out of hand, which Ted Cruz did.  However, Marco did sign the joint Senate letter to Iran, so that should help offset the damage from his moment of vacillation.

Personally, I think the best either one can hope for is a VP nomination.  Here, Marco definitely has the advantage.  Not only is he a little easier to take than Ted Cruz, but comes from a state the Republicans covet.  Every one knows Texas will vote Republican.  Marco would be wise to keep on an even keel, not let himself get drug into any ugly exchanges, especially with Ted, who loves nothing more than to drag you down to his ugly level.

If Marco keeps his cool, he still may be around next Fall, at least in the number two spot.  However, you have to think that Hispanic voters are asking if this is the best their political parties can offer in the way of presidential nominees.

Posted by James Ferguson at 2:53 PM