Sometimes satire is the best medicine 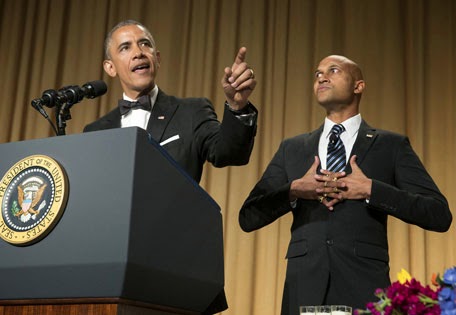 The President showed quite a bit of humor at the annual White House Correspondents Dinner.  His sketch with Luther as his anger translator was probably the highlight of the evening.  Judging by some of the looks in the audience, not everyone found it so funny, but the President eventually let his own "anger" go over climate change, which brought down most of the house.  It seems satire is the best way to go after your critics.  If nothing else it throws your political adversaries off guard.  His little zinger at Michelle Bachmann was perfect.  Anything more and it would have looked like he was actually taking her seriously.

Obama is entering the "fourth quarter" of his administration and feeling "looser than ever."  It shows.  The Republican presidential candidates still see him as a convenient foil, but there will be no overtime.  At some point they will actually have to offer their visions for the presidency, not just run as anti-Obamas.

For a political party that thinks it has the best "field" since Reagan, it seems to be looking very chaotic.  Not that the field back in 1980 was any great shakes.  You had Reagan, George H.W. Bush and John Anderson, who became so disappointed with the direction of the GOP that he ran as an independent in the general election and won seven per cent of the vote.  Not that it stopped the Gipper, who rode his white horse to one of the biggest electoral victories in presidential history.

So far, only three Republicans have declared their candidacy, although May looks to be a big month with the "Good Doctor" Carson, Carly Fiorina, Jeb "Caveman" Bush and Chris Christie all potentially declaring their candidacies.  It is convenient for guys like Jeb to hold off as long as possible, as he can raise money through PACs outside the campaign laws that bind candidates somewhat on the trail.

The odd part is that you would think Obama was running for a third term, as the person who comes up over and over and over again on the campaign trail is the President.  It's like these GOP'ers haven't been able to wrap their thoughts around anyone else, although Rand Paul is soliciting dirt on Hillary Clinton through his website.  That's generally what you have a campaign staff for, but right now he has to focus more on Marco Rubio, who for whatever strange reason has leaped to the top of the pack in the early polls.  He, like Rand and Ted Cruz, have modeled their political careers to some degree on Obama, using vocal first terms in the Senate to climb the Republican ladder with the hope that voters want a fresh face, as they did in 2008.

None of them showed up for the Correspondents Dinner, even though they were all invited.  I guess they didn't want to be the brunt of the President's jokes on television news clips.  Better to look like you are above such a jocular evening, consulting the good book while on the campaign trail in Iowa.  Looks to me that these guys are following the George W. Bush 2000 game plan more so than that of the Gipper.  I would just like to see a little bit of humor emerge on the campaign trail, rather than have these guys all acting like God is on their side.
Posted by James Ferguson at 7:06 PM