Last November, news broke of a new HBO series built around Hernan Cortes, produced by Martin Scorsese.  Given the phenomenal success of Game of Thrones it made sense to try to transport an historic epic to American shores.  Better yet, base it on a real-life character that inspires equal parts admiration and hate.  I can't think of a better actor to cast in the role than the Benicio del Toro, who brings such a deep passion to every role he plays, large or small.  Alas, there hasn't been much talk of the proposed series since, which leaves one to wonder if it will come to pass.

Cortes is indeed a fascinating figure.  Hugh Thomas gave the Spanish conquistador full breadth in his epic history Conquest back in 1994.  From a military point of view, what Cortes pulled off is staggering.  He had no more than 500 men, yet brought down perhaps the greatest civilization on earth at the time.  To read Thomas, Cortes didn't want to engage in battle, but rather convert Montezuma to the Catholic Church and make the Aztecs a willing part of the Spanish empire.  Cortes was so impressed with what he saw in Tenochtitlan that he felt there was no rival except for ancient Rome.  Unfortunately, things didn't turn out very well.  Montezuma's brother wanted no part of the Spanish empire and staged a rebellion against Montezuma that led to many of Cortes' men being massacred, so Cortes allied the disgruntled neighboring villages against Tenochtitlan and staged an epic battle unlike any the Aztecs had previously seen.

The Aztec concept of war was far different from the European concept of war.  They engaged in so-called "flower wars," which were essentially mock battles with a victor declared and the losing side made to offer up human sacrifices.  It seemed like pretty much a done deal as the Aztecs always won, which was no doubt the reason there was so much resentment against Tenochtitlan.  These poor victims were violently mutilated on the altars in deference to the Gods.  Hugh Thomas describes this in great detail. Cortes employed everything at his disposal, built a huge fleet of small ships to traverse the lake that protected the capital, and laid siege to the city in one of the bloodiest assaults ever seen.  The Aztecs were simply overwhelmed by the ferocity of the attack, retreating in horror at the carnage that ensued.  The city was pretty much laid to waste.  Cortes tried to rebuild it as best he could, but Tenochtitlan was never the same again.

The size and scope of a project like this is immense.  There are few filmmakers who could pull it off.  Spielberg was considering a film version back in January of last year with Javier Bardem in the lead role.  Also a good choice.  However, Spielberg has a way of sentimentalizing things, where there was very little sentimental about what took place almost 500 years ago, unless you regard Cortes' attempt to convert Montezuma, which ended in failure. 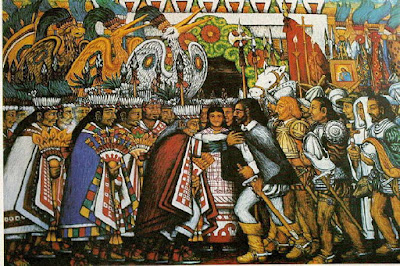 I've long thought this would make a good stage play, as Hugh Thomas probed the psyches of the two men, which would make for great theater.  Montezuma was apparently so convinced the Apocalypse was upon his kingdom, seeing Cortes as the deliver.  The conquistador tried to use this to woo Montezuma to Christianity through the interpretation of La Malinche, a Nahua woman versed in the languages of the region and had picked up a fair amount of Spanish.  She is a fascinating character in her own right, who Octavio Paz explored in his wonderful reverie on what it means to be Mexican, The Labyrinth of Solitude.

A further exploration of the Conquest is Tzvetan Todorov's The Conquest of America, which examines the rival motives and ambitions, and how easy it is to fall prey to your own worst fears as was the case of Montezuma.   Any attempt to bring this story to the screen requires a huge amount of reading and understanding of the events that took place.  This is probably the best place to start from a Western point of view.  The story of Cortes and Montezuma has been more deeply covered in Spanish and Mexican history and literature, but is not so easily accessible for an outsider, except for Paz.  There is also this account taken from surviving Aztecs after the Conquest.

If the television series does come to pass, we probably will get something that more resembles Game of Thrones than what actually transpired all those years ago, which is why it is better to read and imagine what took place in the Halls of Montezuma.
Posted by James Ferguson at 2:32 PM