The Pope and Mrs. Davis 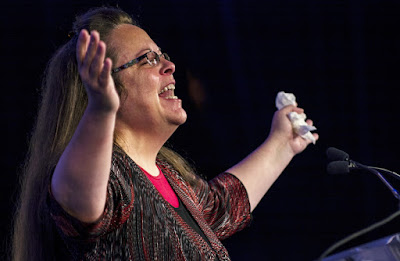 I was ready to dismiss this as one of those absurd claims all too typical of the lunatic right wing of the GOP, better known as the Tea Party.  Sadly, it turns out to be true, Kim Davis actually met with the Pope, and got two rosaries to share with her parents, who apparently are Catholics.  While I wouldn't go as far as Michelangelo Signorile in calling the Pope a coward for this clandestine meeting, it does mar his visit, which for the most part steered clear of political troubled waters.

The Pope had portrayed himself as a pretty tolerant guy.  When asked about gay priests in the Church, he simply said, "Who am I to judge?" which became the catch phrase of 2013.  But, when it comes to gay marriage the Pope gets kind of surly.  He was notably upset to hear Ignazio Marino, the Mayor of Rome, was tagging along with his entourage in the US, saying the mayor only "pretends to be Catholic."  Mayor Marino publicly supports gay marriage.  Well, Kim Davis is not even Catholic, and she's had four marriages to boot.  Surely, this is something his Holiness would frown upon just as much as a Roman mayor trying to bask in his glory.

I badly wanted to give the Pope the benefit of the doubt.  After all, he has yet to weigh in on the issue beyond saying that persons have the "human right" to voice their consciousness.  This seems to me to be all that is needed to be said on the subject.   Instead, the Pope went out of his way to bless Kim Davis in her valiant effort to not issue marriage licenses to gay couples.

The Pope apparently has a soft spot for Pentecostals, even going so far as to visit a Pentecostal church in Rome, apologizing for the religious persecution Italian Pentecostals faced at the hands of the Catholic Church.   This was the first time a Pope had ever done so.  That's all well and good, but the Pentecostals in the United States haven't faced any persecution, as much as they would like to think so.  Rather, they have a nasty habit of persecuting others who don't see along their same religious lines.

You would think the Pope would have avoided the Kim Davis soap opera all together, but maybe he looked at his poll numbers after all and saw that he was below fifty per cent among religious conservatives in America, and felt his support of their effort to re-institutionalize anti-gay marriage laws might boost his numbers.  It seems this Pope wants to be liked, judging by all the selfies he let adoring persons take with him, but for whatever reason he wouldn't let Kim take a selfie with him, which I well imagine she badly wanted to do.

Michelangelo Signorile said he would have more respect for the Pope if he met with Kim Davis out in the open.  Instead, Pope Francis tried to keep this meeting under wraps.  He had to know that Kim wouldn't do the same.  This was a major coup for her.  This is like ten Mike Huckabees and ten Ted Cruzes all rolled into one.  Next thing you know, Kim Davis will throw her hat into the Presidential ring.  Who needs Huck and Cruz when you get a personal audience with the Pope?  She has more experience in elected office than the Donald, Carly and Dr. Ben put together.

The incident will probably die down after a few weeks, but in the meantime it is front page news and prime time fodder for television news.  Fox of course is loving it.  This after several of their political pundits admonished the Pope for being a Marxist and tree-hugger.  Here is Mike Huckabee telling us what a powerful moment it was, with Megyn Kelly gleefully relating the sharp criticism the Pope has taken from the "lamestream media."  It seems the religious conservatives have a friend in the Vatican after all.

Posted by James Ferguson at 1:33 PM