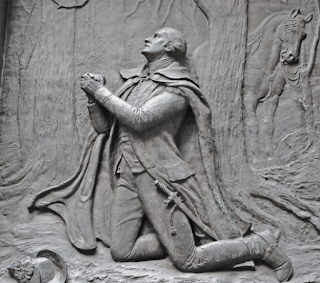 Creative interpretive history has become a hallmark of the contemporary Republican party, which has gone out of its way to present the Founding Fathers more as Christian clerics or Libertarians than as enlightened statesmen.  This plays well with the base of their political party, which doesn't bother to read the many texts, letters and memoirs of the Founding Fathers.  They bequeathed a wealth of writings that no other founding fathers of any other country can match.  These texts greatly help historians determine what they meant by governance.  Yet, our founding fathers remain the subject of endless speculation and debate that more often than not leaves us scratching our heads.

When Ben Carson isn't dismissing Jews for not standing up for themselves during the Holocaust, he is busy telling audiences that the Founding Fathers not only didn't want a Muslim president, but wrote it into Article II of the Constitution.  Apparently, Carson doesn't think Muslims qualify as "natural born citizens."

He might have been on firmer ground if he said that the Founding Fathers harbored anti-Islamic biases, largely as a result of the Barbary Coast Wars (1801-1805), as American ships were coming under attack by Muslim pirates off the coast of West Africa. This led to America's first war against someone other than the British and Indians.  Jefferson apparently bought a copy of the Q'uran to better understand the Muslim mind, but it is doubtful he ever read it. 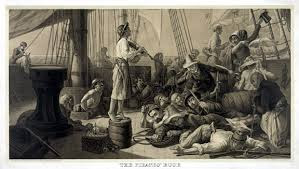 Given that most American Muslims were enslaved at the time the Constitution was penned, the likelihood they were able to vote, much less elect a president was not even in question.  Yes Ben, most if not all Muslims in America in the early 19th century were black slaves.  At best, they were considered 3/5's human, allowing far greater representation for the Southern states than they deserved, since the Southern states extended no civil rights to their slaves, like the ability to vote.

But, our good doctor doesn't want to cloud his judgement with such facts, anymore than he wants to be reminded that Poland was easily overrun by Nazi Germany in 1939 despite having guns.  By war's end, over 6 million Poles had been killed, half of which were Jews.  Carson, like many Republicans today, prefer to live in an alternate reality that not only re-imagines the present, but also the past to support their narrow view of society.

The "scholars," if you can call them such, range from David Barton, who has written an extensive number of revisionist "history" texts on the Founding Fathers and the Constitution in his effort to break down the wall between church and state, to Bill O'Reilly, who continues his serial killing spree with his latest victim being Ronald Reagan.  There are a whole host of other writers in between, with a number of conservative publishing houses that will print their screeds if the major publishers won't.  These conservative authors use conservative television and internet news sources to promote their books and ideas.  Critics are dismissed as effete intellectuals like Alan Colmes, who serves as a token liberal on Fox News.

The folks at Fox have gone out of their way to support Dr. Ben's dubious understanding of the Constitution and World War II.  Their psychologist in residence, Dr.Keith Ablow, offers this spirited defense of Carson's opinion that the Jews could have saved themselves if only they had more guns.  Carson's views on Muslims have been widely endorsed on Fox, despite the widely held view among conservatives that Obama is a Muslim.  A view Fox helped perpetuate by inviting so many birthers on their news programs, including Birther-in-Chief Donald J. Trump.  But, I suppose Obama isn't counted, because he "pretends" to be Christian.

The Libertarian attack has focused more on big government, usually in the form of taxes, which no one wants to pay.  They mischaracterize the Constitution as badly as the religious conservatives to suit their agenda, believing that the Founding Fathers favored a small government.  Actually, the Founding Fathers were split on the issue, which came to the fore in the 1800 election when Thomas Jefferson ran against John Adams largely over Federalist policy.  In the end, Jefferson kept much of the Federalist government in place.  It wouldn't be until Andrew Jackson that a President took on the national bank and other federal institutions, which he felt diminished state rights, but even here Jackson had no time for South Carolina's first secession bid in 1830. 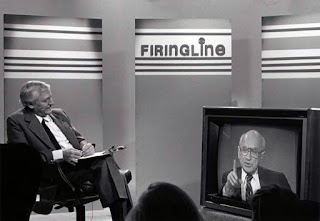 These days, state rights mostly focus on issues of "religious liberties" and gun rights.  There is no longer much of an intellectual debate taking place of the just subordination of federal government like there was in the 60s and 70s with such leading conservative lights as William F. Buckley and Milton Friedman, who actually won the Nobel prize for economics.  I suppose Ron Paul comes the closest to this line of thinking, while his son Rand has drifted more into populist Libertarianism.

There has been a dumbing down of "conservativism" which would make even William Bennett squirm.  You might remember he led the crusade against universities that wanted to expand the Humanities reading list, notably at Stanford.  He was the Secretary of Education at the time, considered one of the most learned Republicans.  But, today, Mr. Bennett mostly concerns himself with the increasing availability of pot.  He was also briefly George H.W. Bush's Crime Czar, ushering in an era of "zero tolerance" drug policies that smacked of big government gone wild, filling prisons with first time drug offenders, as well as mass confiscation of personal property.

It doesn't seem that many conservatives read today, much less process information in any meaningful way if we use the conservative media as a gauge.  Ablow's comments are particularly disturbing as he is a trained psychiatrist and should know better.  Of course, one can say the same of Ben Carson, who is a noted neurosurgeon.  If we look at contemporary Republican leaders, we will find a number of Ivy league graduates, including Ted Cruz. These persons should be enlightening the base of their political party, but instead are playing straight to the lowest common denominator.  The Republican Party has become an anti-intellectual party that not even Richard Hofstadter could have imagined.

That doesn't stop these conservative hacks from writing books however.  Even Ben Carson has a new book expanding on his views that he has been busily promoting on conservative talk shows.  I guess an alternative reality needs an alternative bookstore with authors like Carson and O'Reilly to stock it, although I wonder how much of their audience actually reads their books, as you so rarely hear any of these books reference them.