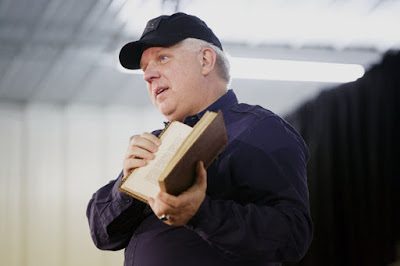 I guess if Donald Trump can claim the ghost of John Wayne, then why can't Ted Cruz claim George Washington?  However, I have to question if Glenn Beck is the official spokesman for George Washington.

The conservative talk show host has been tromping around the Cruz campaign trail, offering up artifacts like a compass and an 18th century copy of Don Quixote, claiming they once belonged to George Washington.  He says "America needs someone like Cruz who displays the exactness of a surveyor."  That's almost enough for anyone to spit his coffee out on the keyboard.  One can say many things about Cruz, but "exactness" is not one of them.

Don Quixote would be the more apt comparison -- a person with a spittoon on his head that holds onto an archaic set of Medieval knight-errantry values, battling windmills and declaring his love for an old hag in a tavern he thinks is his queen and lady despite the numerous rejections.  Why Glenn would want to hold this book as testimony to his candidate is questionable, but apparently he thinks that it is enough that the book was owned by Washington to reach to him beyond the grave and claim his endorsement.  I guess this makes him Ted Cruz's Sancho Panza.

It doesn't matter that Mount Vernon has refuted Glenn's claims, Beck continues on his quixotic quest to try to turn Republicans to Ted Cruz anyway he can.  He has enlisted the help of armchair historian David Barton, who likewise claims to hold onto original artifacts and texts of the Founding Father, which he loves to share with Glenn on his show.  The two have also written numerous books expounding on the faith of the Founding Fathers, which is at odds with more reputed biographies.  To which Barton responds, "historians don't use original texts."

After Nevada's results, it is not surprising that many Republicans buy into this bunk.  Even though Ted didn't win, he and Trump and Carson combined for a staggering 72.5 per cent of the Republican vote.  Trump and Carson appeal to the same level of ignorance in the GOP.  Of course, Nevada Republicans have long been seen as rather daft.  After all, they chose to run the demented Sharron Angle against the highly unpopular Harry Reid in 2010 and lost.

It's too bad George Washington didn't work for Ted, who saw himself come in third (again) behind Marco Rubio.  Both were well behind Trump, who took a whopping 45 per cent of the caucus vote.  I wonder how much the "Bundy rebellions" figured into this not-so-surprising result, as Trump was appealing directly to anti-federal voters in Nevada.  It probably would have been better for Ted to have sought the endorsement of Cliven Bundy.  Whatever the case, I don't think George would approve of Glenn Beck speaking for him.
Posted by James Ferguson at 11:16 AM